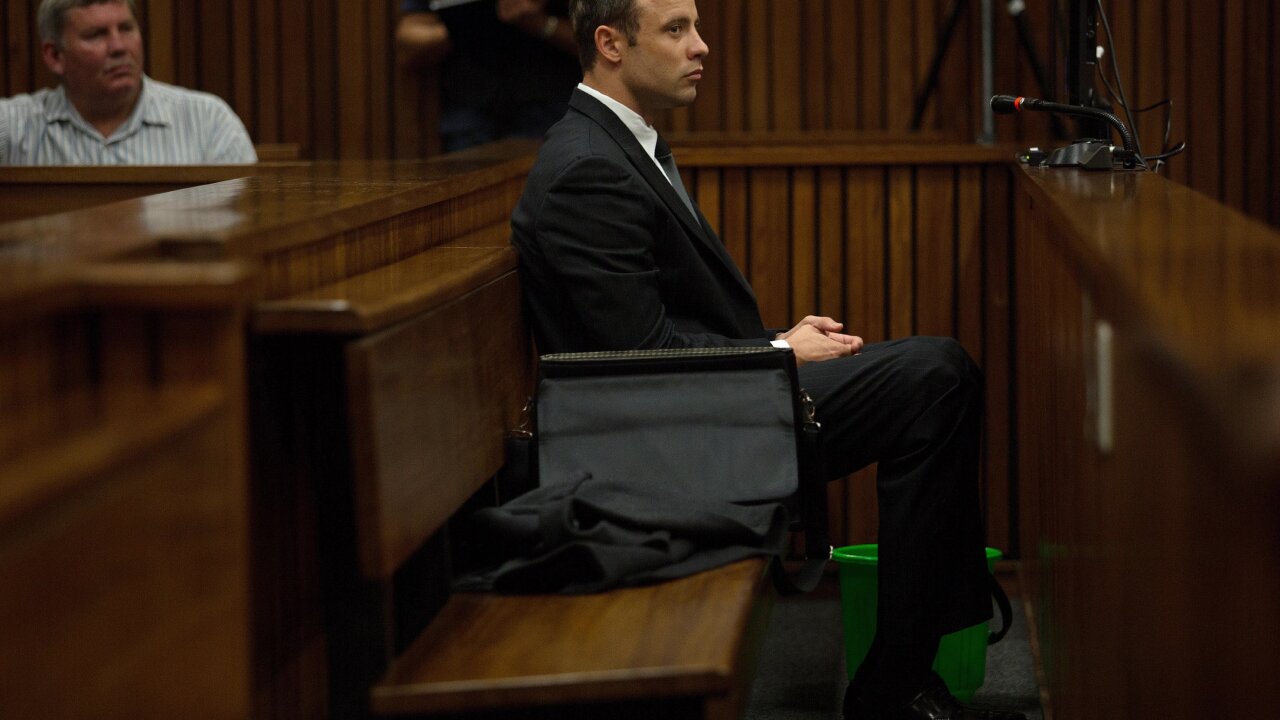 Oscar Pistorius is seen at the North Gauteng High Court on Tuesday, 11 March 2014 during his murder trial.

PRETORIA, South Africa (CNN) — Gruesome images shown at his murder trial Thursday were too much for Oscar Pistorius to take. He vomited.

He had covered his face before, when bloody photos flashed across court monitors of his own bathroom, where his girlfriend Reeva Steenkamp lay after he shot her on Valentine’s Day last year.

Otherwise, the South African Olympic runner wore an absent gaze, as he watched his defense lawyer painstakingly cross-examine a police expert, whose testimony a day earlier based on the door to that bathroom threatened to discredit him.

For a second day, attorney Barry Roux picked at forensic expert J.G. Vermeulen’s testimony with fastidiously detailed questions about the validity of evidence offered by the dents, gashes and scratches on the door.

On Wednesday, Vermeulen, a police colonel, provided some of the trial’s most dramatic testimony by swinging Pistorius’ own bat at that very door from Pistorius’ home, assembled in court for the judge in the Pretoria courtroom to see.

Pistorius, 27, has said that he bashed the door to get Steenkamp, who was 29, out of the locked bathroom by knocking a hole in it.

The point of contention is over a detail involving the runner’s prosthetic legs.

Pistorius’ natural legs are amputated below the knees, and he wears prostheses. He is widely known for the blade-shaped ones he dons for track competitions, which have garnered him the nickname “Blade Runner.”

The prosecution and defense agree that the South African track star killed his girlfriend on Valentine’s Day last year when he shot four hollow-point bullets through the locked bathroom door.

But while the state argues it was deliberate murder, Pistorius says he thought Steenkamp was an intruder in his house in the middle of the night and the killing was a tragic accident.

Pistorius says that after he realized his mistake, he put his prosthetic legs on, before trying to whack the door down.

That’s where his account differs from the prosecution’s arguments. They say he was on his stumps when he swung the bat. The stance represents a reversal for the prosecution, which previously held that Pistorius was wearing the legs.

In the courtroom, the police colonel wielded the bat from different distances and angles, even on his knees to simulate the height of Pistorius without his prosthetic legs on.

The officer concluded that Pistorius was on the stumps of his legs when he battered the door.

If Vermeulen’s testimony stands up, it could look as though Pistorius was lying.

Roux prodded at the evidence and put the police expert through his paces.

Pieces of the door are missing, and as Roux asked Vermeulen to account for them, the expert meticulously sifted through his memory and shuffled through documents point for point.

Pistorius’ attorney castigated the police expert for not testing the prosthetic legs against markings on the door to see if they matched. It would be an indication that his client was wearing them and thus telling the truth.

Then came the images that disturbed Pistorius.

Roux called up photos from the scene, the bathroom, with the label “suspected bloodstains” next to splattered pools. A panel, part of the doorway, lay on the floor.

Roux grilled Vermeulen over parts of the scene, and as images quickly flipped by, a photo of Steenkamp’s body lying on its back and other bloody scenes appeared to flash on the screen.

Pistorius’ face sank into his hands.

That torment repeated itself later in the day, when the photos flashed by on a screen directly in front of him. That’s when Pistorius could take it no longer.

After he vomited, the prosecution had graphic photos removed from the slide presentation.

On Wednesday, Roux cast additional doubt on Vermeulen’s assessment by suggesting that even with his prosthetic legs on, Pistorius would not be swinging a bat at the same height as an able-bodied person.

The door probably will be used in court to show the trajectory of the bullets fired at Steenkamp, which the two sides will use to argue whether it was premeditated murder or not.

The court heard Wednesday that the door was intact before the shots were fired.

Under cross-examination, Vermeulen said the only time he went to the crime scene was March 8, 2013, nearly a month after the shooting.

Vermeulen’s testimony seemed to indicate that some things about the door had changed between the time photos of it were taken at the scene and it appeared in court.

Vermeulen told the court there were footprints consistent with police shoes on the bathroom door at one point, and photos of this were shown.

The footprints are not on the door now, and Vermeulen said he did not know why. He said that from photos, he knew the door was removed from its hinges and left on the floor for some time.

The case against Pistorius is largely circumstantial, prosecutor Gerrie Nel said in his opening statement last week. Pistorius and Steenkamp were the only people in his house when he killed her.

Nel has been building a picture of what happened through the testimony of experts; neighbors who heard screaming and bangs that night; current and former friends of Pistorius; and a security guard who sped to the scene because of reports of gunshots.

Many prosecution witnesses’ accounts are consistent with Pistorius’ version of events — that he got up in the night, went out to his balcony to get a fan, came back inside and heard noises in the bathroom that he thought came from an intruder.

He said he took the gun and fired while calling for Steenkamp to call police. When she didn’t answer, he realized it could have been her in the bathroom, he said.

Samantha Taylor, a former girlfriend of Pistorius, testified Friday that he reacted similarly once when she was sleeping at his house.

She said he once heard something hit a bathroom window and woke her up to ask if she’d heard it, too, before taking his gun and going to investigate. Taylor said Pistorius woke her up other times when he thought he’d heard a noise.

One prosecution witness, the pathologist who conducted the autopsy on Steenkamp, cast doubt on the defense timeline by saying she had probably eaten about two hours before she died. Pistorius says the couple had gone to bed hours before that.

If he isn’t convicted of premeditated murder, the sprinter could face a lesser charge of culpable homicide, a crime based on negligence. The sentence for culpable homicide is at the judge’s discretion. The trial is expected to take at least three weeks.