Malaysian airliner disappears over Vietnam; 239 on board 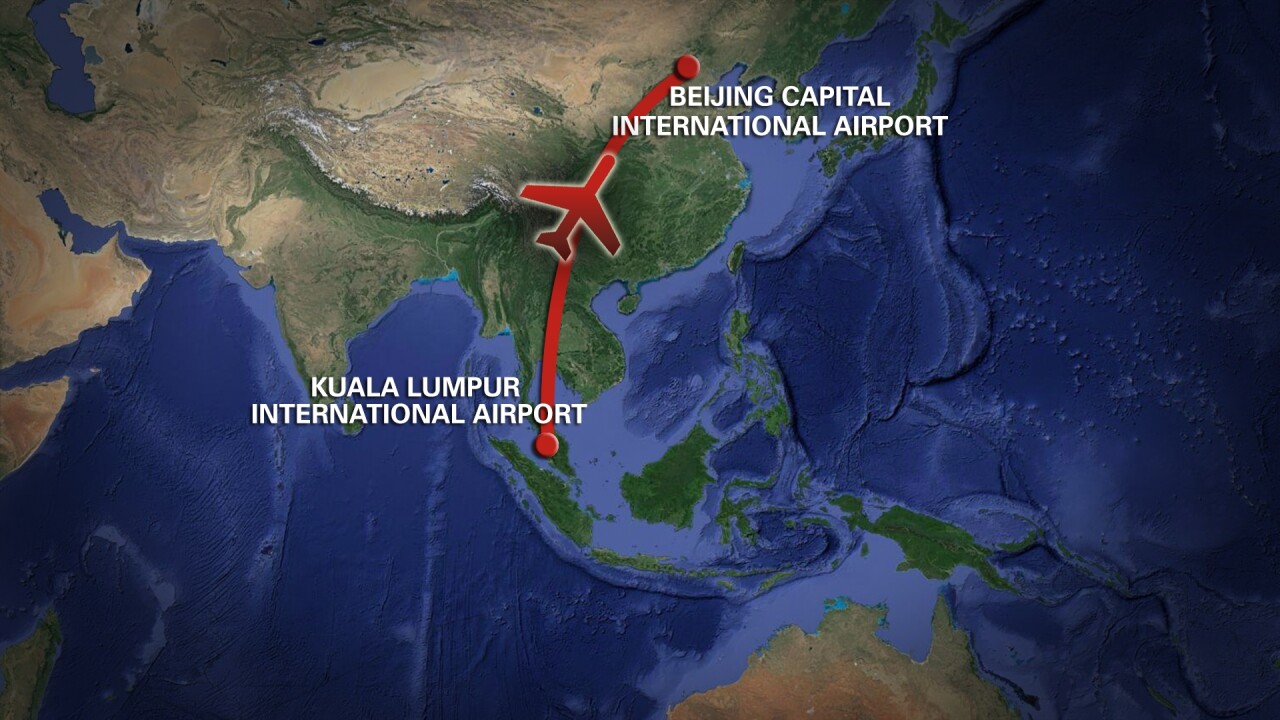 Malaysia Airlines released more information, including names and ages, of the passengers on the missing plane:

(CNN) — Nobody knows exactly what happened to a Malaysia Airlines plane that disappeared Saturday, but families of the 239 people on board are waiting and expecting the worst.

Air traffic controllers lost track of Malaysia Airlines Flight MH370 not long after it left Kuala Lumpur, the capital of Malaysia, on its way to Beijing. More than half the passengers were Chinese nationals.

“We have no idea where this aircraft is right now,” Malaysia Airlines Vice President of Operations Control Fuad Sharuji said on CNN’s “AC360.”

There’s even confusion about where the plane might have gone down.

Vietnamese and Chinese state media, both citing Vietnam’s military, reported the plane crashed off the southern coast of Vietnam.

But the reports are incorrect, said Malaysia’s acting transport minister, Datuk Seri Hishammuddin Hussein. “The CA (Civil Aviation Authority) says that is not true, and our foreign office says it is not true,” he said.

Later, China’s state-run CCTV reported that Vietnam’s National Search and Rescue Center said the missing plane might have crashed at the overlapping waters between Malaysia and Vietnam.

Relatives of the 154 Chinese nationals on board gathered Saturday at a hotel complex in the Lido district of Beijing as a large crowd of reporters gathered outside.

Family members are kept in a hotel conference room, where media outlets have no access. Most of the family members have so far refused to talk to reporters.

The plane carried 227 passengers, two of them infants, and 12 crew members, the airline said. Air traffic control in Subang, in Malaysia, had last contact with the plane.

At the time of its disappearance, the Malaysia Airlines plane was carrying about 7.5 hours of fuel, an airline official said.

The passengers are of 13 nationalities, the airline said. Nationalities and the number for each of passengers on the flight were:

Passenger Manifest: Malaysia Airlines has released the names of the passengers on the plane

One infant from the United States and another from China were included in the tally.

The airline’s website said the flight was piloted by a veteran.

“It doesn’t sound very good,” retired American Airlines Capt. Jim Tilmon told CNN’s “AC360.” He noted that the route is mostly overland, which means that there would be plenty of antennae, radar and radios to contact the plane.

“I’ve been trying to come up with every scenario that I could just to explain this away, but I haven’t been very successful.”

He said the plane is “about as sophisticated as any commercial airplane could possibly be,” with an excellent safety record.

“The lack of communications suggests to me that something most unfortunate has happened,” said Mary Schiavo, former inspector general of the U.S. Department of Transportation, in an interview with CNN International.

“But that, of course, does not mean that there are not many persons that need to be rescued and secured. There’s still a very urgent need to find that plane and to render aid,” she said.

There is one recent blemish for the Boeing jet: An Asiana Airlines Boeing 777 carrying 291 passengers struck a seawall at San Francisco International Airport in July 2013, killing three people and wounding dozens more. It’s unknown if mechanical failure was involved.

The Malaysian Maritime Enforcement Agency (MMEA) has deployed one aircraft and three ships in a search-and-rescue operation following the disappearance of the plane. The Malaysian government says its navy is cooperating with the Vietnamese navy.

China’s Xinhua news agency says the Chinese Coast Guard is sending orders to its on-duty vessels nearby to set out to the water where the plane incident likely occurred.

Malaysia Airlines said it was working with the authorities who have activated their search and rescue team to locate the aircraft. The airline said the public can call +603 7884 1234 for further information.

Malaysia Airlines operates in Southeast Asia, East Asia, South Asia, the Middle East and on the route between Europe and Australasia.

Part of the company is in the private sector, but the government owns most of it.

Malayan Airways Limited began flying in 1937 as an air service between Penang and Singapore. A decade later, it began flying commercially as the national airline.

In 1963, when Malaysia was formed, the airline was renamed Malaysian Airlines Limited.

Within 20 years, it had grown from a single aircraft operator into a company with 2,400 employees and a fleet operator.

If this aircraft has crashed with a total loss, it would the deadliest aviation incident since November 2001 when an American Airlines Airbus A300 crashed in Belle Harbor, Queens, shortly after takeoff from JFK Airport. Killed were 265 people, including five people on the ground.