Ex-girlfriend: Pistorius cheated on me, kept gun by his bed 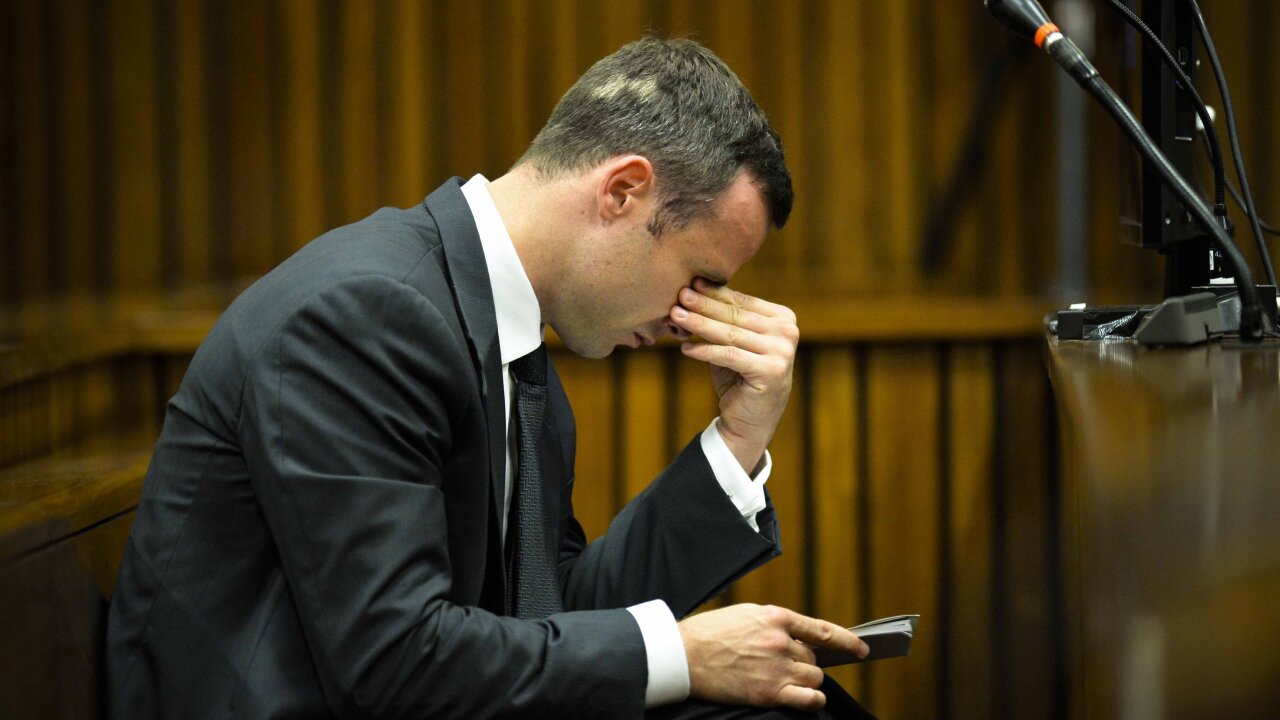 Oscar Pistorius appears in the dock on the fifth day of his trial at the high court in Pretoria, South Africa, Friday, 7 March 2014.

PRETORIA, South Africa (CNN) — The former girlfriend of Oscar Pistorius, the track star charged with murdering his girlfriend Reeva Steenkamp, testified Friday that their relationship ended when he cheated on her with Steenkamp.

Samantha Taylor also testified that Pistorius slept with a pistol on his bedside table or on the floor beside his prosthetic legs, and once became so angry after a traffic stop that he shot a gun through the sunroof of a car.

Pistorius pleaded not guilty Monday to one charge of murder and a firearms charge associated with Steenkamp’s killing on Valentine’s Day 2013, as well as two gun indictments unrelated to her death. Pistorius, 27, nicknamed “Blade Runner,” has admitted killing his 29-year-old model girlfriend, but says it was a tragic error after he mistook her for an intruder.

Taylor said she met Pistorius in 2010, when she was 17, and they started dating the following year. She said they broke up twice, the second time on November 4, 2012, after he took Steenkamp to a sports banquet.

Defense lawyer Barry Roux asked if Taylor admitted in two e-mails to cheating on Pistorius. Taylor says she’s never admitted to cheating on him but admits she had a relationship with another man after they broke up the first time.

Roux also asked Taylor for details about the time he supposedly shot the gun out of the sunroof of a car that they were both traveling in as passengers, but Taylor could not remember the name of the highway or the part of South Africa where the incident happened.

Taylor testified that Pistorius was angry and irritated after the traffic stop, even though he was not driving. She said he joked around about firing a shot and then, after he fired the shot, he laughed.

Prosecutor Gerrie Nel asked Taylor if she was ever at Pistorius’ house and he thought there was an intruder. Taylor said yes.

The fifth day of the Pistorius murder trial opened Friday with the defense trying to chip away at testimony of a neighbor who rushed to the track star’s home the night he shot Steenkamp.

Roux pointed out that Johan Stipp, a doctor who lived near Pistorius and the first person to arrive at the scene, made two statements to police and both times said he heard “two or three shots.”

“You could not be sure of the number of noises you heard,” Roux said.

“It would be fair to say that,” said Stipp, on his second day of testimony.

Roux also asked Stipp about screams he heard. Stipp said Thursday the man’s screaming came from “much more to the left” of the initial screams. On Friday, Stipp said the screams came “slightly from the left.”

Pistorius broke down in court Thursday as Stipp said he went to Pistorius’ residence after hearing the shots. He said he saw Steenkamp lying on the floor, her brain tissue mixed with blood and Pistorius praying for her to live.

“I remember the first thing he said when I got there was, ‘I shot her, I thought she was a burglar and I shot her,’ ” Stipp told the court in Pretoria.

And although Stipp is a prosecution witness, his testimony may in fact bolster the defense case, CNN legal analyst Kelly Phelps said after Thursday’s dramatic testimony.

Prosecutors appear to have been trying to demonstrate that Pistorius and Steenkamp had a loud argument before the shooting, suggesting that is the reason he killed her.

But the defense is proposing that what neighbors thought was Steenkamp screaming in fear for her life was in fact Pistorius screaming when he realized what he had done.

Pistorius and at least two neighbors made phone calls to security after the shooting, allowing the defense to use phone records to establish a timeline of events to the second.

Stipp’s version of events appears to coincide with the defense case, said Phelps, who teaches law at the University of Cape Town.

Attorney: Steenkamp could not have screamed

Stipp on Thursday described the grisly scenes when he tried to save the athlete’s girlfriend after the fatal shooting on Valentine’s Day 2013.

He said he had arrived and found Steenkamp’s body lying at the bottom of the stairs. Pistorius was bent over her body with his left hand over her right groin and two fingers of his right hand in her mouth as he tried to clear her airway.

Stipp tried to assist and said he found no signs of a pulse in her neck, no peripheral pulse and no breathing movements.

As the doctor described the details of her injuries to the court, Pistorius broke down with his head in his hands. He was also seen convulsing but then recovered and wiped his face and nose with a handkerchief.

Stipp, who said he had trained in the army with assault rifles and 9 mm pistols — the type of pistol that killed Steenkamp — said he had been surprised to hear no ambulance had been called when he arrived. He left after one arrived.

The doctor was later cross-examined by defense attorney Barry Roux, who said Steenkamp could not have been the one screaming at the time Stipp heard the cries of a woman out of her mind with fear.

Roux had consulted three specialists and the autopsy and asked Stipp: “That person after the shots would not have been able to scream. That person would be nonresponsive; does that make sense to you as a medical doctor?”

“It does,” Stipp replied.

The prosecution interjected, saying Steenkamp could have screamed after the first shot. Earlier in the week, Nel, the prosecutor, reading a report from an expert, told the court that of the four bullets fired toward Steenkamp “the fourth bullet hit her in the head. She then died.”

Pistorius sat impassively during the exchange between Roux and Stipp. He leaned forward, his head down in his hand, as his attorney asked Stipp if the athlete had wanted Steenkamp to live.

“He definitely wanted her to live, yes,” Stipp replied. “He looked sincere to me. He was crying; there were tears on his face.”

After the court adjourned for the day Thursday, Pistorius sat in his place in tears as his sister consoled him, an arm wrapped around his shoulders and holding him close while the room emptied out.

Roux and Nel have already done battle over two other witnesses, husband and wife Charl Johnson and Michelle Burger, who also live nearby and heard shouting and bangs in the early hours of February 14, 2013.

Johnson made notes about what he remembered in the weeks after the shooting.

Roux grilled Johnson about notes such as “the screams did not sound like fighting but more like the panic and distress calls of being attacked.”

Roux established that Johnson and Burger thought they were hearing noise from a house break-in and not from an act of domestic violence. Nel said Roux was taking individual sentences out of context.

The defense only has to show that there is reasonable doubt Pistorius intentionally killed Steenkamp.

Judge Thokozile Matilda Masipa will decide whether Pistorius is innocent or guilty. South Africa does not have jury trials.

Johnson and his wife have testified to hearing shouts from Pistorius’ house before a series of gunshots around 3 a.m. Johnson told investigators he and his wife didn’t discuss their versions of events with each other. But on the stand, Johnson said he did discuss how many shots he and his wife heard and the timing of those shots.

“You and your wife could just as well have stood together in the witness box,” Roux remarked. For witnesses to be considered reliable, they have to maintain independent versions of events, Roux said. “You failed, Mr. Johnson,” he said.

Lawyers had briefly detoured Wednesday into another of the four charges Pistorius faces, related to the discharge of a gun he was holding in a crowded restaurant in Johannesburg about a month before the killing.

In South Africa, premeditated murder carries a mandatory life sentence, with a minimum of 25 years. Pistorius also could get five years for each gun indictment and 15 years for the firearms charge.

If he isn’t convicted of premeditated murder, the sprinter could face a lesser charge of culpable homicide, a crime based on negligence, and could be looking at up to 15 years on that charge, experts said.

Pistorius is not claiming self-defense; he is claiming to have been mistaken about his need for self-defense. He is denying he intentionally, unlawfully killed Steenkamp. He has never denied killing her.

Pistorius, whose nickname the “Blade Runner” reflects the special prostheses he uses while running, won six Paralympic gold medals and became the first double-amputee runner to compete in the Olympics, in London in 2012.

Cover girl Steenkamp, who was soon to star in a TV reality show, was on the cusp of becoming a celebrity in her own right at the time of her death.