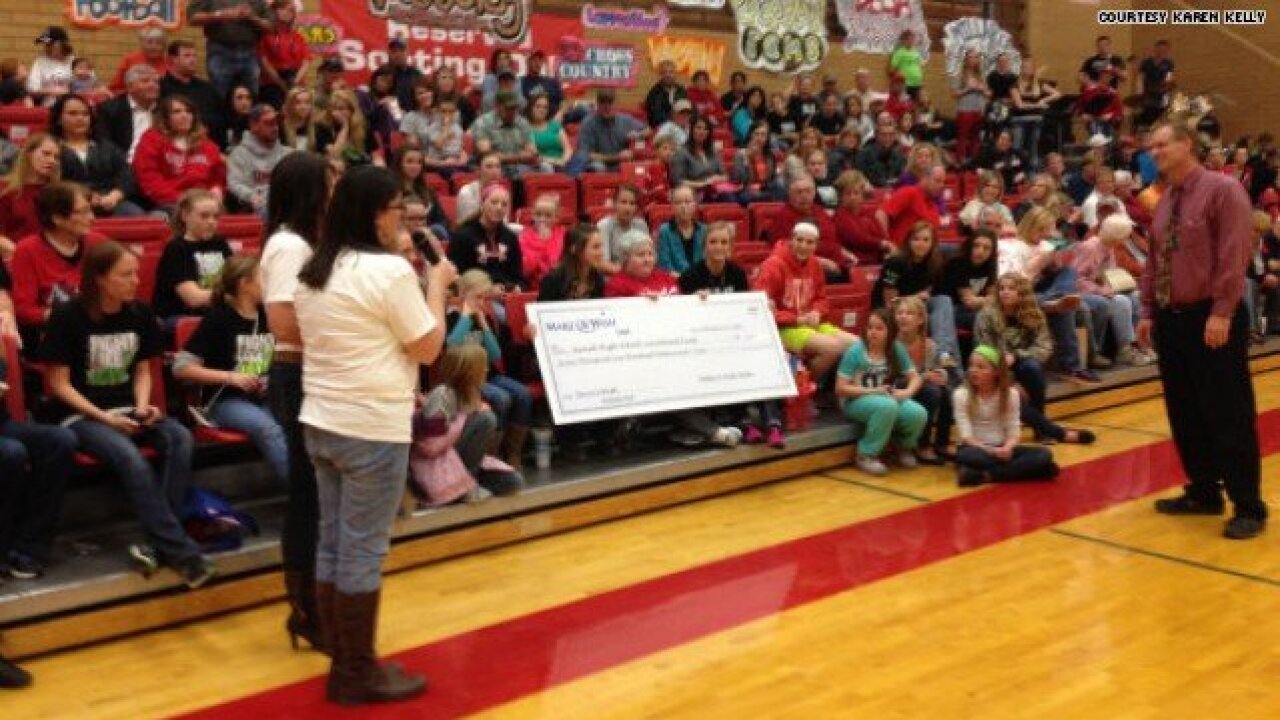 (CNN) — If you need a little faith in humanity today, look no further than the story of Jayci Glover and her friends at Kanab High School in Kanab, Utah.

Jayci, 13, has terminal lymphoma, and up until early this year, had spent most of her time in Salt Lake City — nearly five hours from her hometown — receiving treatment. Despite her struggles and absences, the students of both Kanab’s middle and high schools have gone out of their way to make Jayci feel special and loved.

When Jayci was approached by the Make-A-Wish foundation, she selflessly decided to give some of that love back.

Jayci’s great-aunt, Karen Kelly, is the librarian at Kanab High School. She told HLN on Wednesday about Jayci’s latest triumph.

“[Make-A-Wish] came to her and asked her if she would like to make a wish,” Kelly said. “They said, ‘There’s Disney World, there’s Disneyland, some people fly to Hawaii.’ They talked with her about all the different things. And she said, ‘No, I really want to do something for my friends.'”

At first, Kelly said, Jayci was gung-ho about getting a new rec center, but that’s an investment a bit outside the foundation’s scope. Jayci’s grandfather is the high school’s basketball coach, and he had another thought.

“He said, ‘How about a new scoreboard?’ And we all thought that was such a wonderful idea,” Kelly said.

And so, last Wednesday, in front of a gym full of her classmates and friends, Make-A-Wish presented the teen with a check for $7,500.

Kelly says the family has been “blown away” by the amount of support Jayci has gotten, not just from the students at Kanab, but from the entire town.

“These kids have just been amazing, to continually Facebook her or chat, or just different things,” she said. Jayci was a student at Kanab Middle, but as her story spread, the high school students got involved as well. They created T-shirts which read, “Fight Like Jayci.” They’ve also made her an honorary member of their volleyball team.

“Those kids have not stopped making books for her and sending pictures, making quilts, they’ve just done anything to lift her spirits,” Kelly said.

In February, when it became clear that there was nothing else doctors could do for Jayci, her parents decided to bring her home so she could spend time with her family and friends. As they approached town, she was greeted with a “hero’s welcome” as students and community members lined the streets, cheering and holding signs.

Jayci now spends her time resting and enjoying days out with her friends. “She’s very happy, she’s very content,” Kelly said. “She’s definitely had some quality experiences since she got home.”

The Glover family knows their daughter’s time is limited, but the grace and strength with which she has battled the disease is still a victory to those who know her. “Make no mistake, Jayci has won her battle with cancer,” her mother, Heather Glover, wrote on her Caring Bridge blog.

“She is so wise beyond her years, and she just has a very strong, I don’t even know what to call it, demeanor about her,” Kelly said. “The will to live is amazing.”

The Glover family has started a fund to help pay Jayci’s extensive medical bills at YouCaring.com.