Sources: Train engineer said he was ‘in a daze’ before crash 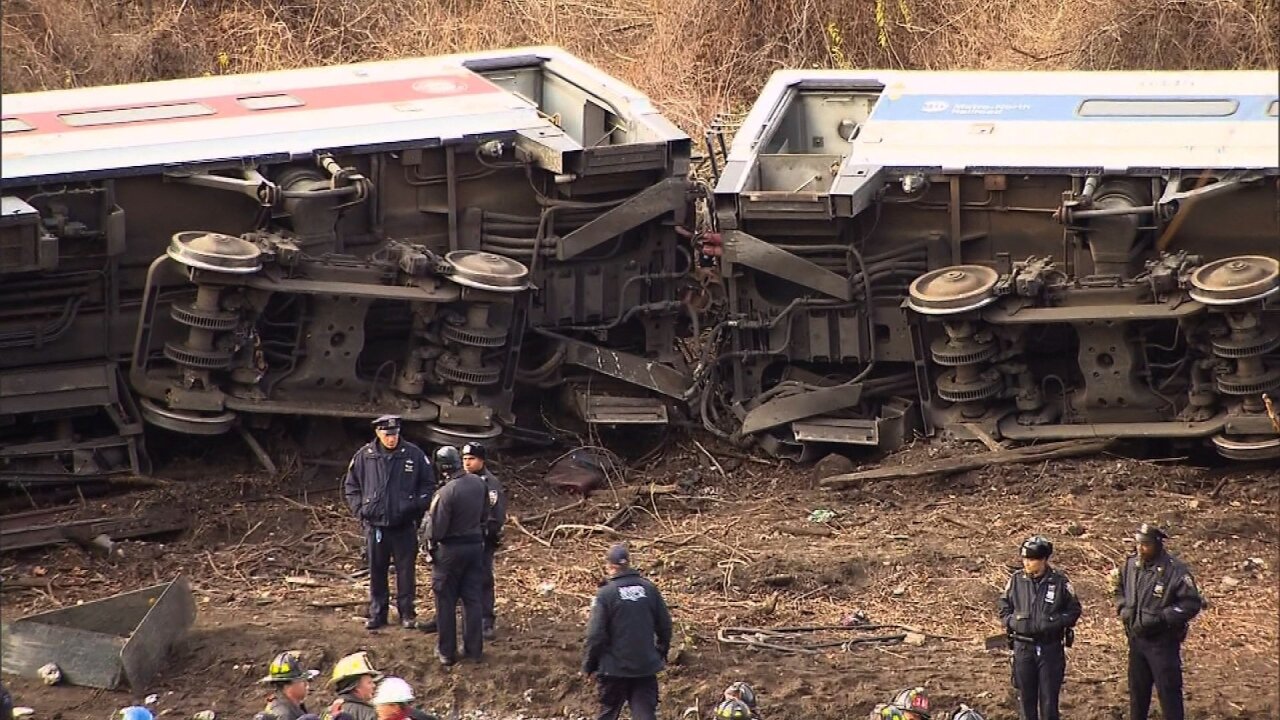 (CNN) — The results from alcohol breath tests for the train engineer of the New York commuter train that derailed Sunday morning were negative, National Transportation Safety Board member Earl Weener told reporters Tuesday. Other toxicology results have not come back yet, Weener said.

There is no indication that either the brake or signal system malfunctioned during the derailment of a Metro North train Sunday in New York that killed four people and injured 67 others, National Transportation Safety Board member Earl Weener said Tuesday.

(CNN) — The engineer of the New York commuter train that derailed Sunday morning — killing four people and injuring 67 others — told investigators at the scene he was “in a daze” before the crash, two senior New York law enforcement sources told CNN Tuesday.

In a brief conversation with investigators, William Rockefeller said that moments before the derailment of the Metro-North Hudson Line train in the Bronx he was “going along and I’m in a daze. I don’t know what happened,” according to a law enforcement official familiar with that conversation.

Asked by investigators what he was thinking when he said he was dazed, the engineer said he couldn’t say. Rockefeller spoke to Metropolitan Transportation Authority and New York Police detectives at the crash site before he was taken to the hospital Sunday.

The locomotive and all seven coaches jumped the tracks while barreling into a curve at 82 mph, nearly three times the 30 mph-limit for the curve, National Transportation Safety Board member Earl Weener told reporters Monday.

Fatigue is a factor being investigated, according to a separate New York law enforcement source. But Rockefeller also told investigators on site that the brakes had failed, as CNN reported previously. Speaking at a news conference on Monday, officials noted the train had been able to stop nine times at stations ahead of the crash.

Steven Harrod, a University of Dayton professor and expert on railway operations, said the early hour of the derailment, along with the decreased rail traffic on the post-Thanksgiving weekend, also could have played a role in Rockfeller’s “daze.”

Harrod called it a “twilight” of inattention or distraction common in transport crews on late-night and early-morning shifts.

“If he was dead, dead asleep, his hands would have come off the controls and … some of the ‘dead man’ stuff would have come into play,” said Harrod, referring to “dead man” mechanisms that automatically stop trains when the engineer is incapacitated. “But if it was kind of that twilight where you’re just there and still kind of gently holding onto to things but not quite really aware, which in my mind is still sleeping. That’s still sleeping.”

A senior law enforcement source told CNN that Rockfeller passed a breath test shortly after the accident and there were no indications that he was intoxicated. He also was given a toxicology test Sunday, but the results have not been released.

In the culture of railroad workers, Harrod said, admitting to falling asleep at the controls was almost as bad as admitting to being drunk or on drugs.

“It’s very realistic that he, in fact, really did fall asleep,” he said. “Falling asleep at the controls of a locomotive is a horrible evil. You’re not supposed to do that. He really doesn’t want to come out and say, ‘I fell asleep.’ It’s emotionally embarrassing. It’s not just a rules violation. There’s a psychological component. If you come out and say, ‘I fell asleep,’ it’s just purely beyond embarrassing. It’s a violation of the sacred understanding of what a train crew should do.”

Rockefeller is not working or getting paid, according to Meredith Daniels, MTA spokeswoman.

“He is out of service. This is an unpaid status,” said Daniels, adding that Rockefeller is presumed innocent until disciplinary procedures are completed.

NTSB officials would not comment on Rockefeller’s reported comments, but they have said fatigue is routinely investigated as a possible cause in such cases.

“We don’t have the work history at the moment,” Weener told Wolf Blitzer Monday on CNN’s Situation Room.

“We will be developing what we call a 72-hour timeline, so that we have a good understanding of what sort of activities preceded this accident. That’s part of our normal investigation.”

Harrod said the rail and signal hardware date to World War II and, if Rockfeller was dazed or momentarily distracted, there was no system in place to alert him that he was traveling at 82 mph.

“It’s a perfect storm kind of thing,” he said. “You can look back in the history books of railroad accidents and there are plenty more where this came from. Events and things that happen that in and of themselves are not supposed to be bad but they turn into bad things.”

Railroad safety officials have long pushed for a system known as positive train control technology, which combines GPS, wireless radio and computers to monitor trains and stop them from colliding or derailing. But the railroad industry has opposed the technology because of the high cost.

Harrod said the transportation safety board has urged railroads to install PTC in some form since 1970. In 2008, Congress ordered rail lines to adopt the technology by December 2015.

“PTC would have sounded an alarm as soon as the train exceeded the speed limit,” said Harrod. “Technology will help. PTC will help. But there will be some other thing in the future, other ways that somebody will find to defeat the system or screw up.”

The train was about 10 miles short of its destination, Manhattan’s Grand Central Terminal, when it derailed on the approach to the Spuyten Duyvil station in the Bronx.

The NTSB’s interview Monday with Rockefeller was cut short because of his emotional state, Weener told CNN. The interview is expected to resume Tuesday and Wednesday. “I think it was basically emotional issues with the engineer,” Weener said. The crash, which took four lives, was “a very traumatic experience for him.” Weener said Rockefeller was cooperative but was “not up to it.”

NTSB officials said it is not unusual for those who have survived fatal accidents to be emotional during interviews. Nor is it unusual for the board to allow participants additional time to complete the interview.

Weener said investigators will spend time Tuesday at a rail yard evaluating the train’s brakes and will take a closer look at the rail cars. They will continue to evaluate the train’s event recorder data to see if they can find any anomalies with the brakes.

“The interviews with the train crew members, of course, will be very important,” he said.

The union representing Rockefeller would not comment on reports about the engineer being dazed but its general chairman, Anthony Botallico, said Rockefeller is cooperating.

“There’s a lot of quotes coming from him, but when you’re in a crash like this, anything you say in the beginning has to be taken with a grain of salt,” Botallico said. “Bill is very distraught. I’ve been with him, and he really hasn’t had a lot of sleep and he’s just crushed by everything. I know how sincere he is and he’ll be very forthcoming very shortly.”

“Billy is fully cooperating with the NTSB,” Botallico added. “He needed to get some rest. He’s very traumatized by the loss of life. It’s best that it comes from him what happened. He’s a quality human being. I know him personally. I’ve been a conductor and representative, and I’d be proud to have him as my engineer.”

Botallico said Rockefeller started out as a janitor at Grand Central and “worked his way up.”

“He’s been in operations for quite a while,” he said. “He used to change the time of the trains in Grand Central. He was volunteer fireman. He’s just a guy who’s always gone out of his way for everyone else. It brings me to tears because the loss of life is something that — it’s the hardest thing to deal with. When you lose life it’s difficult for all.”

Said Harrod: “This engineer, I’m sure, as the evidence comes out, I think we’re really looking at a sad, really basic kind of inattentiveness. Nothing fancy: No alcohol, no drugs, maybe not even a cell phone. Just plain vanilla inattentiveness.”