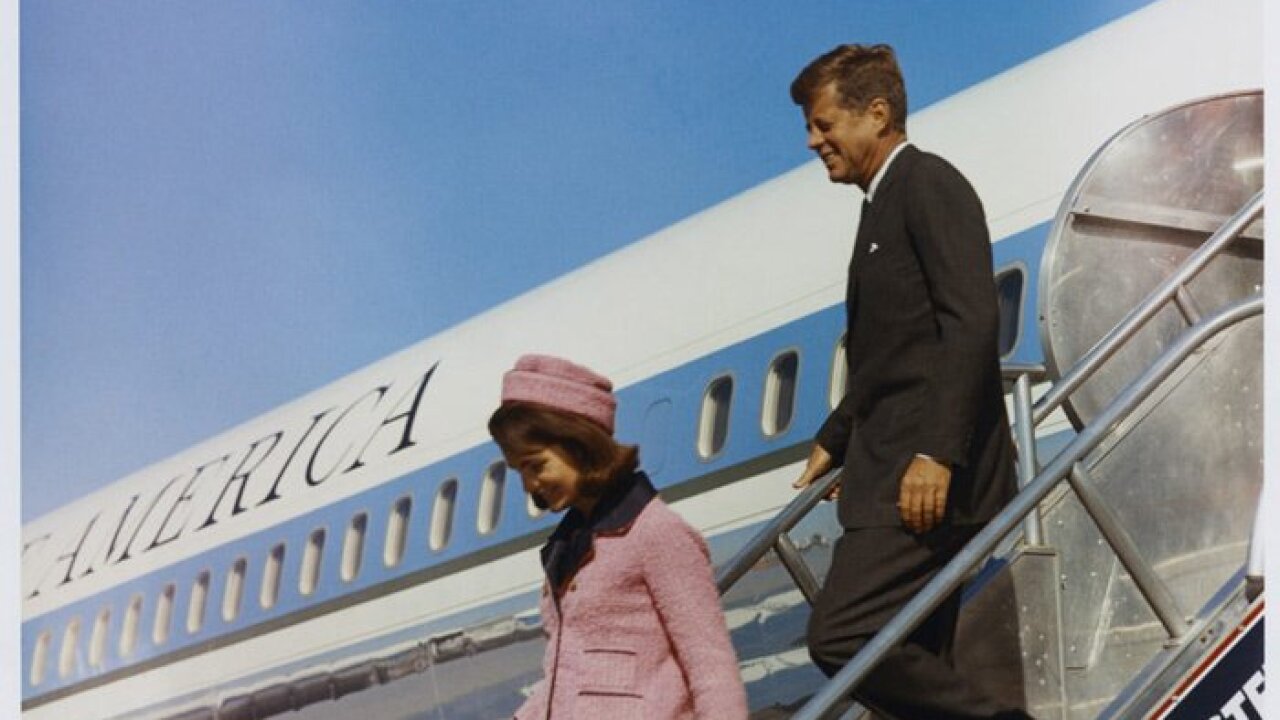 First lady Jacqueline Kennedy and the president exit SAM 26000 in Texas in November 1963, just hours before the president would be assassinated. Image courtesy the National Archives via CNN.

First lady Jacqueline Kennedy and the president exit SAM 26000 in Texas in November 1963, just hours before the president would be assassinated. Image courtesy the National Archives via CNN.

(CNN) — Jacqueline Kennedy was still wearing the blood-stained watermelon pink suit when she got to the White House in the early-morning hours after her husband was shot dead.

She had refused to take it off at Parkland Hospital in Dallas or on the flight back to Washington with the body of her husband.

Once at the White House, her personal maid put the suit in a bag so Mrs. Kennedy wouldn’t have to look at it.

In the words of President John F. Kennedy, she looked “smashing” in the suit, which may be why the President asked Jackie to wear the now-famous outfit to Dallas on November 22, 1963.

The suit looked like a Coco Chanel, it was actually a knockoff, made in the United States. The first lady wore it at least six times before that fateful day.

She was known for her fashion sense. Museums have hosted collections of her gowns, hats and jewelry.

In Fort Worth on the morning of November 22, the President even joked about his wife’s style.

“Two years ago, I introduced myself in Paris by saying that I was the man who had accompanied Mrs. Kennedy to Paris. I am getting somewhat that same sensation as I travel around Texas. Nobody wonders what Lyndon (Johnson) and I wear,” Kennedy quipped.

Hours later, Jackie Kennedy was trying to crawl out of the presidential limo, her suit spattered with her husband’s blood.

When aides suggested she change her clothes, she refused.

“Her remark, I think she made it more than once is, ‘No, I’m going to leave these clothes on. I want them to see what they have done,’ ” author Philip Shenon said.

Hours later, Kennedy continued to wear the suit during the emergency swearing in of Johnson as President.

That whole scene is obviously just surreal,” Shenon said. “She arrives in the cabin in Air Force One in these clothes, covered with the President’s blood, and she’s expected to stand there and witness the swearing in of her husband’s successor.”

The suit today is in the National Archives building in Washignton.

It came in a box, along with a handwritten note from Jackie Kennedy’s mother on her personal stationery. It read simply: “Jackie’s suit and bag – worn November 22nd, 1963.”

The suit was never cleaned.

The public hasn’t seen the suit since the assassination and won’t for another 90 years.

In 2003, nine years after her mother’s death, Caroline Kennedy gave the suit as a gift to the people of the United States with the understanding that it would not be put on display until 2103.

And even then, the Kennedy family will have to be consulted before any attempt is made to display it. They want to avoid sensationalizing the horrible act.

Also hidden from view in the new archives building in Maryland: the blue blouse Jackie Kennedy wore beneath the pink suit, her stockings, blue shoes and blue purse.

What they don’t have is the first lady’s iconic pink pillbox hat.

“The hat is a mystery,” said Shenon, who wrote “A Cruel and Shocking Act.”

The archive has the suit stored in a windowless vault, in an acid free container, where the air is changed three times an hour to properly maintain the wool and cloth.

It is kept at a temperature of 65 to 68 degrees, which is best for the fabric.