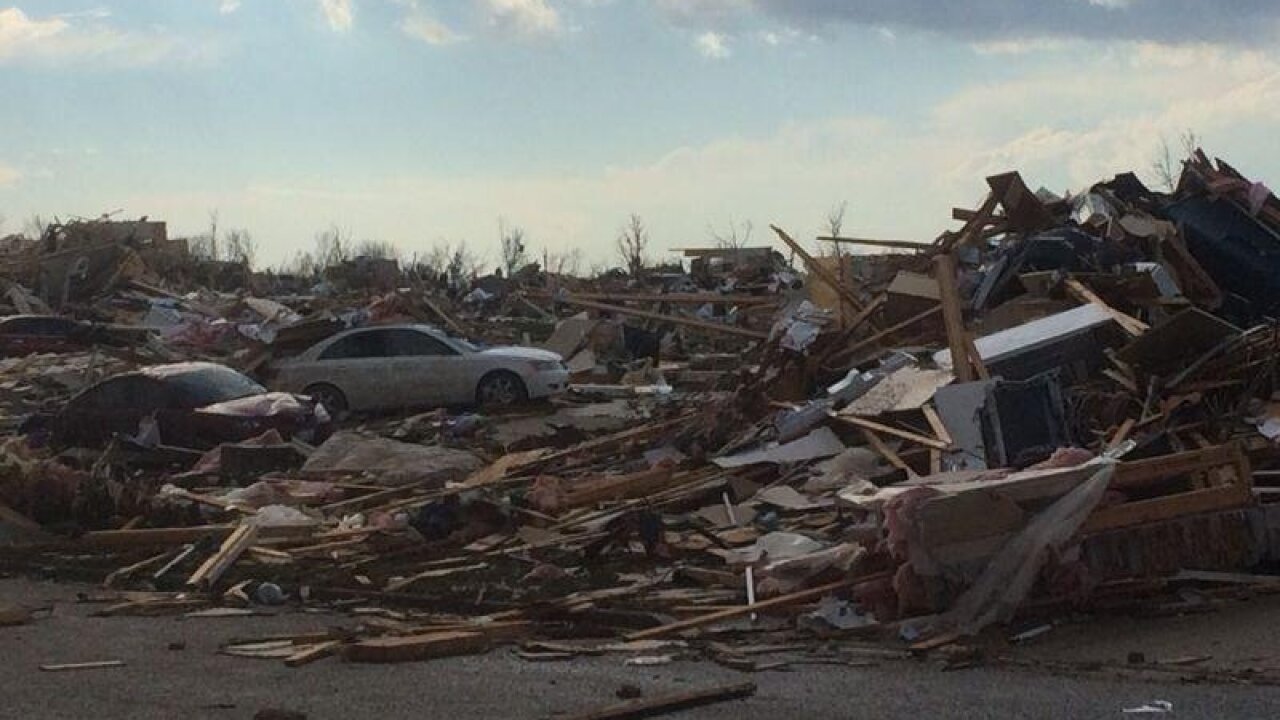 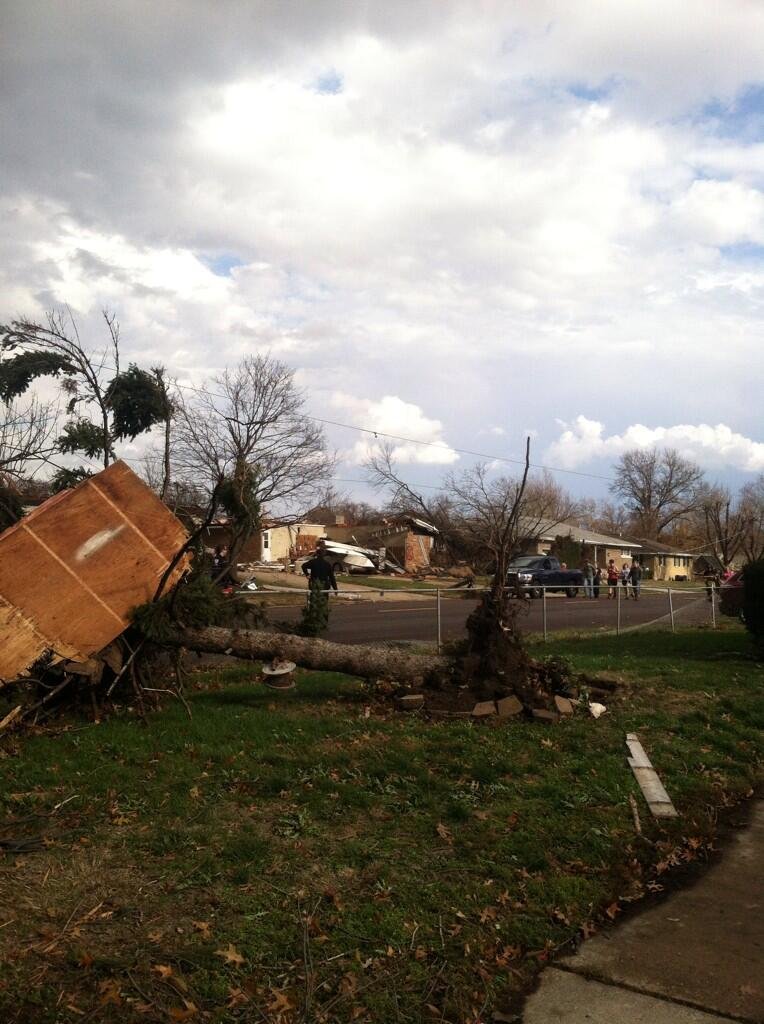 WASHINGTON, Illinois (CNN) — Michelle Crumrine was out of town when a tornado tore through her neighborhood.

She returned to Washington, Illinois, to find pieces of her life strewn about where her house once stood.

Nearby, rescuers with flashlights trudged through the neighborhood in the dark of night, searching for signs of life in the wreckage.

As a severe weather system slammed the Midwest on Sunday, spawning dozens of tornadoes, flash floods and hail, this town of 10,000 people was among the hardest hit. A neighborhood was flattened, at least one person died and dozens in the area were injured.

Across the state, officials said six people were killed in storms.

In two communities, storms destroyed at least 70 homes, according to Jonathon Monken, director of the Illinois Emergency Management Agency. Rescuers were trying to reach people trapped in their basements, he said. One hospital in Peoria was treating 37 patients with injuries.

The outbreak also forced fans to evacuate the stands for nearly two hours during an NFL game in Chicago.

“It was complete destruction,” said Anthony Khoury, who lives in Washington. “There are people in the streets crying.”

As a tornado neared his home, Khoury prayed and recorded a video of the dark twister churning toward him.

“The tornado happened in my backyard, and you can hear people screaming,” he told CNN’s iReport. “We were freaking out.”

While his house survived the storm, Khoury said others in the neighborhood weren’t as lucky.

Video from CNN affiliate WMBD showed one Washington neighborhood where a tornado smashed cars and houses, littering the ground with broken wood beams and flinging furniture and debris onto lawns, sidewalks and streets.

“I grabbed my daughter and ran,” one storm survivor told WMBD.

In nearby Peoria, Mayor Jim Ardis said his city was planning to send aid to help storm recovery in Washington, where a tornado hit what he described as a “very densely populated area.”

Jack Lance, who lives in Pekin, said he saw a lot of wreckage in his town.

“We saw trees down, houses with their roofs completely torn off. I saw a lot of people in distress with their homes destroyed,” he said. “It wasn’t a pretty sight.”

Officials delayed the NFL game between the Chicago Bears and Baltimore Ravens for nearly two hours as storms approached Chicago, warning spectators to leave the stands at Soldier Field and head for covered areas.

“The rain started coming, the skies got black, the wind was insane, and they evacuated us to underneath the concrete concourse,” said Jim Arnold, who was at the game with his 11-year-old daughter.

“We’ve been through 15-degree-below weather and winds, but never anything like this,” Arnold said. “The winds gusted at 70 mph, and the winds and the rain were horizontal and everybody was running. It was just crazy.”

Fans returned to their seats and the game resumed mid-afternoon after the storm passed.

But for other cities in the region, severe weather was on the way.

Throughout the region, at least 67 tornadoes had been reported as of 10:15 p.m. Sunday, the National Weather Service said.

“These storms having been moving so fast today, it’s been hard to keep up,” said storm chaser Tony Laubach, who spoke to CNN as he watched a tornado touch down outside Lebanon, Indiana.

In Illinois, two deaths were reported in Nashville; one in Washington; one near Brookport; and one near Unionville, according to officials.

Monken said there were at least 11 confirmed tornado touchdowns, and officials there expect the number of storm-related injuries to grow.

In Oak Lawn, a wind gust of 86 mph was recorded as a severe thunderstorm rolled through the area.

In Washington County, Illinois, an EF4 tornado packing a peak wind of 166 mph hit, leaving a path of destruction that stretched more than three miles, according to a preliminary survey by the National Weather Service.

At least six trucks overturned on highways about 80 miles west of Chicago due to high winds, the Ogle County Sheriff’s Office said.

In a Twitter post, Indiana State Police shared a photo of twisted metal, piles of debris and the shell of a school building.

More than 160,000 people are without power across the state, said John Erickson, a spokesman for the Indiana Department of Homeland Security.

Storms damaged a mall and a bank and collapsed the roof of a fire station in Kokomo, Indiana, said Larry Smith, emergency management director in Howard County.

Some houses had their roofs torn off when a tornado hit the area, he said.

Officials in Kokomo declared a state of emergency and closed schools for Monday, according to the city’s Twitter account.

Indiana Gov. Mike Pence is scheduled to tour the storm damage there on Monday, his office said.

Teams from the National Weather Service are set to survey damage throughout the region.

And in Ohio, more than 75,000 residents were without power after the storm hit, emergency officials said.

This is a particularly dangerous situation, the National Weather Service said in a bulletin released Sunday morning.

CNN meteorologist Karen Maginnis said the weather outbreak came later in the year than some might expect.

“The primary time for tornadoes, as we well know, is springtime. Then we see a second high that comes in the fall,” she said. “Is this late? It is rather late, because the temperatures have been very warm.”

A “very vigorous” low-pressure system is moving across the Great Lakes, she said.

“On the backside of that, temperatures are dramatically cooler. So that cold air is filtering in behind it, warm air out ahead of it,” she said. “And…we get some twisting motion in the atmosphere. And that’s why we see this tornadic activity.”