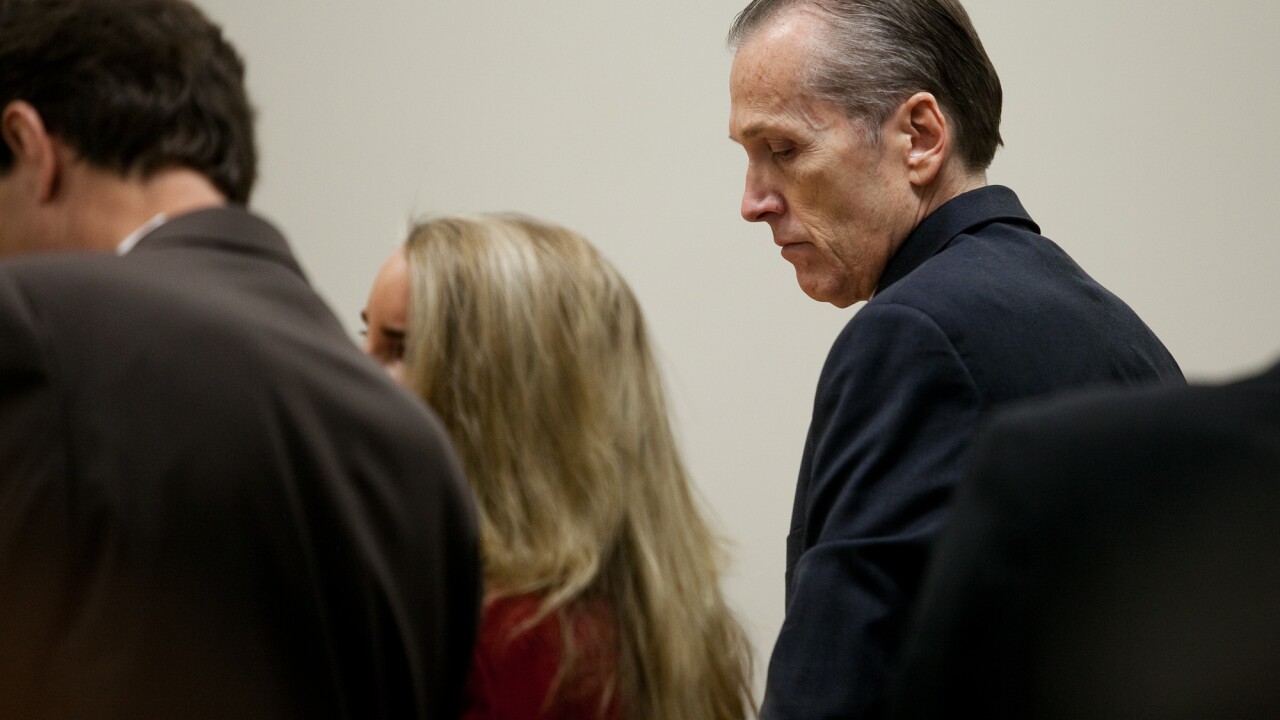 Martin MacNeill stands while awaiting the arrival of the jury before proceedings at the Fourth District Court in Provo Tuesday, Nov. 5, 2013. MacNeill is charged with murder for allegedly killing his wife Michele MacNeill in 2007. MARK JOHNSTON/Daily Herald

PROVO -- Three inmates who served federal prison time with Dr. Martin MacNeill testified against him on Tuesday, revealing incriminating statements he allegedly made.

The judge has forbidden disclosure of the inmates' identities out of concern for their safety, because they are perceived to be "snitches."

"It's against prison code," Inmate #3 testified. "Prison code is you don't snitch, you don't fool with gays, and you don't steal."

Inmate #3 testified that he befriended Dr. MacNeill, whom he called "Doc," while in the federal prison in Texarkana, Texas. MacNeill worked out with him in the prison yard.

"I was sitting at the table, he had this mad look on his face and i'm like, 'Doc, what's wrong?' And he was like, 'My f---ing daughters,'" the inmate said, apologizing to the jury for his profanity. "He said they didn't give him no hallway house because his f-in' daughters and his 'B' of a wife."

Both inmates initially testified that they were led to believe Dr. MacNeill's wife was also incarcerated.

"Dipsy or Gypsy or something like that," Inmate #3 said of her name.

They later learned through magazine articles and TV interviews that Dr. MacNeill was accused of killing his wife, Michele. Inmate #2, who said he was Dr. MacNeill's "cellie" (cellmate) said he asked him about it.

"He said his wife had plastic surgery and she had passed away, had a heart attack," he told the jury. "He said there's no proof. They couldn't prove it."

Inmate #4 testified under cross-examination that Dr. MacNeill never admitted to killing her.

Dr. MacNeill is accused of killing his wife, Michele, by drugging her and drowning her, so that he could continue an affair with another woman. Defense attorneys have contended that no murder took place.

The trial could go to the jury by Thursday. Prosecutors intended to call two more inmates to testify against him, including one who may invoke his Fifth Amendment right against self-incrimination on the witness stand.

Jason Poirier, who served time with Martin MacNeill in the Utah County Jail, is expected to testify about statements the doctor made about his wife's death. However, he may refuse to testify under cross-examination about crimes he is accused of. The judge allowed so-called "prior bad acts" to be admissible in court.

In court, the judge had Poirier stand before him as he explained his right against self-incrimination. The judge allowed Poirier to have an attorney with him as he testified tomorrow.

Prosecutors said they planned to rest their case after recalling Dr. MacNeill's mistress, Gypsy Willis, to the stand. Outside of court, deputy Utah County Attorney Chad Grunander would only tell FOX 13 they had "additional questions" for her.

Both sides could rest their cases by Wednesday evening.