MacNeill’s daughters testify against him at murder trial 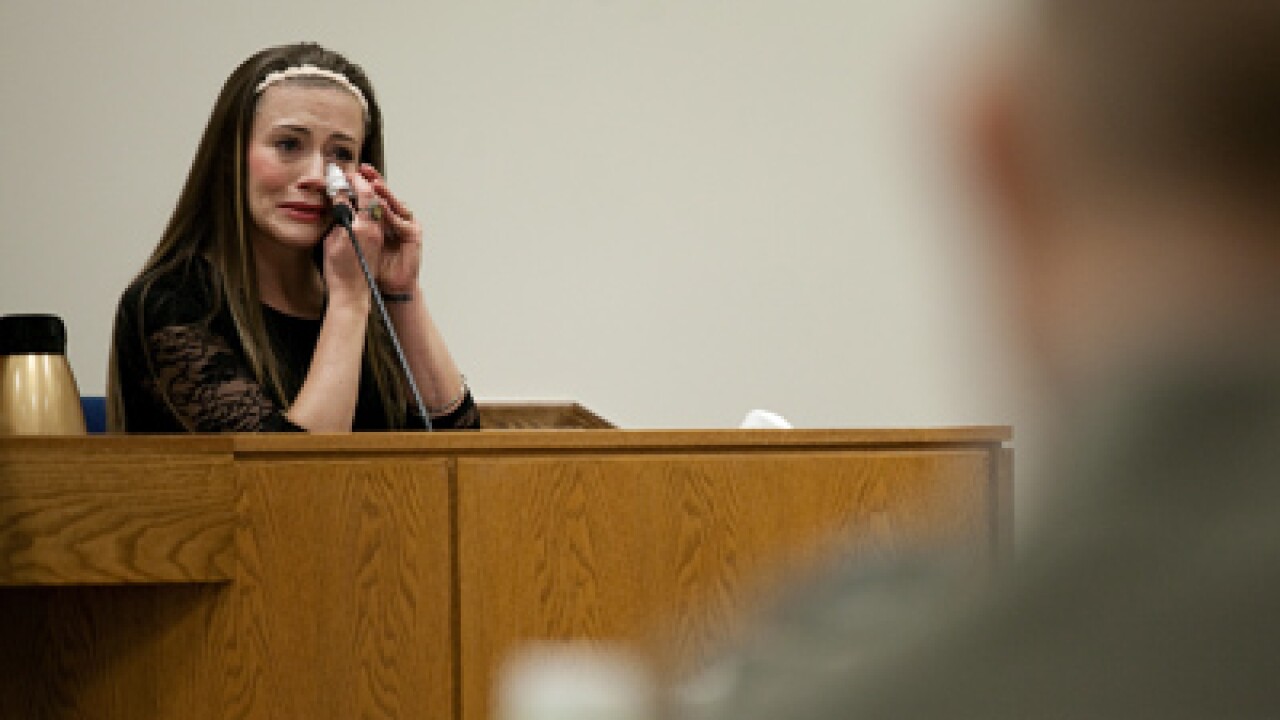 Vanessa MacNeill wipes tears from her eyes while testifying at the trial of her father Martin MacNeill at the Fourth District Court in Provo Wednesday, Oct. 30, 2013. Martin MacNeill is charged with murder for allegedly killing his wife Michele MacNeill in 2007. MARK JOHNSTON/Daily Herald

PROVO -- Three of Dr. Martin MacNeill's daughters took the witness stand to testify against him, providing damning testimony about his behavior surrounding his wife's death.

"He did respond, 'Yeah, I think I gave her too much medicine,'" MacNeill's daughter, Alexis Somers, testified of a confrontation she had with him as her mother recovered from plastic surgery in April 2007.

Somers said she spoke to her mother later in the evening as she came out of sedation.

"She said, 'Lexie, I don't know why, but your dad kept giving me medications. Things to swallow. I think I even started to throw up, but he kept gving me more medication," Somers testified.

Somers said her mother wanted to "feel" the pills, so she knew what her husband was giving her. Days later, Michele MacNeill was dead. Utah County prosecutors contend Dr. MacNeill killed his wife by overdosing her with prescription drugs and drowned her in a bathtub.

Somers, then a medical student, testified that she kept a log of her mother's medical treatment including prescription drugs administered to her. The day her mother died, she said, that book vanished.

Somers said she overheard an argument between her parents, where her mother accused her father of having an affair.

"She confronted him again and said, 'I don't believe your story. I want the phone records. I'm not going to let this die,'" Somers recalled.

"Did you hear your dad's response?" prosecutor Chad Grunander asked.

"He told her she was crazy. He said, 'It's ridiculous, I'm not having an affair,'" Somers testified.

A few weeks later, Somers said she was called by her father, who said he had found a "nanny" for his daughters: a woman named "Jillian." Somers said she confronted him about Gypsy Willis.

Sabrina MacNeill testified that her nanny "didn't do much."

"She made spaghetti once," she testified. "She didn't cook, she didn't do anything. She lived downstairs."Sabrina testified that she saw "Jillian" sneak into her father's room, and the two vacationed together.

Prosecutors also put another former mistress of Martin MacNeill's on the witness stand. Anna Walthall testified that she had an affair with Dr. MacNeill in 2005, as she was going through a divorce.

During "pillow talk," she said Dr. MacNeill once remarked to her he could make someone have a heart attack and it wouldn't be detectable.

"There's something you can give someone that's natural, it's not detectible after they have a heart attack," she testified.

It was Somers who provided perhaps the most damaging testimony of the prosecution's case against Dr. MacNeill. Cross-examination yielded few concessions from her, as defense attorneys sought to show inconsistencies in her testimony and prior statements.

At one point, cross-examination bogged down so much, that members of the jury were seen yawning, shifting uncomfortably in their seats and rubbing their eyes. Judge Derek Pullan had to call a break for jurors to stand up and stretch before allowing the questioning to continue. Somers will return to the witness stand on Thursday.