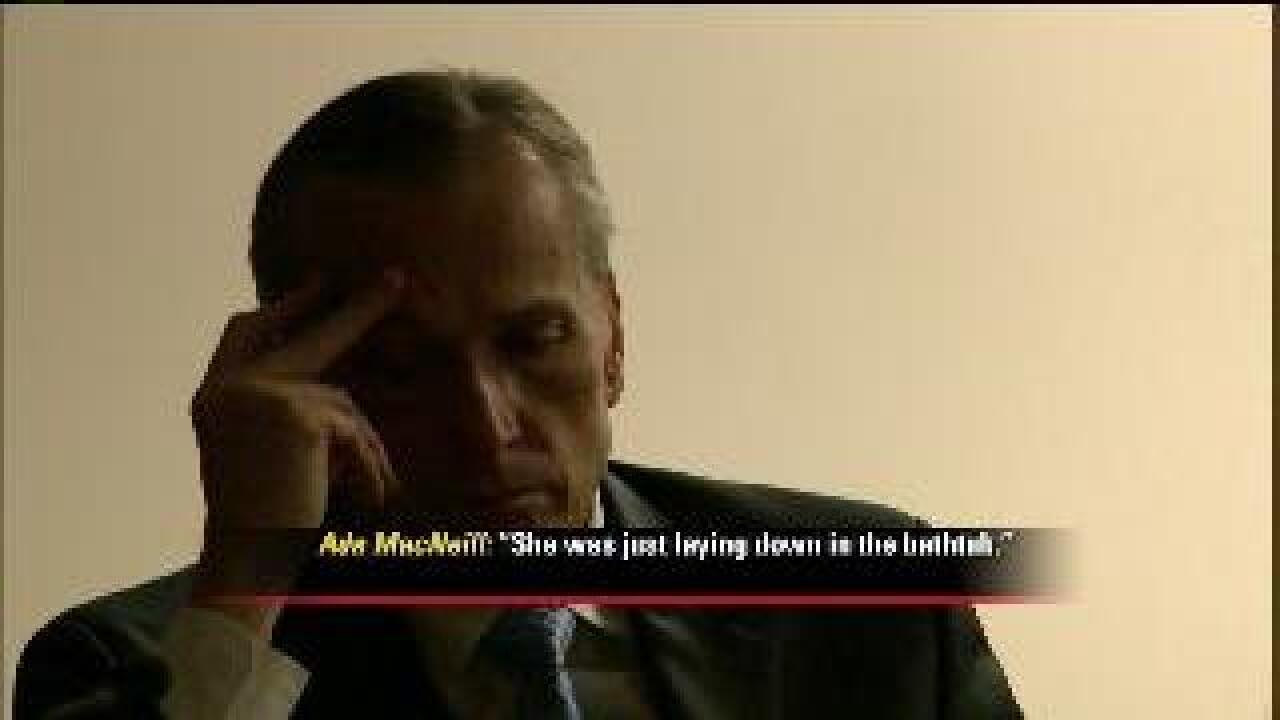 PROVO -- Dr. Martin MacNeill appeared to be crying as Utah County prosecutors played a videotaped interview his daughter gave to police about finding her mother in a bathtub.

"She was just laying in the bathtub," Ada, then 7, told a police investigator, who then asked what her father did. "He was screaming, 'Quick! Go and get help!'"

The videotaped interview was conducted in September 2008, a year after Michele MacNeill was found dead in her home. Prosecutors have charged her husband with murder, accusing him of overdosing Michele and drowning her. It was Ada who found her mother.

"We walked in the room and the water, we're like, looking for her... and then the water… I guess the water was, like, brown and stuff," Ada told investigators.

Fourth District Court Judge Derek Pullan refused to allow Ada to testify before the jury, ruling that her memories of her mother's death had been "tainted" by her siblings, who are convinced Dr. MacNeill killed his wife. But he did allow the videotaped interview to be played. Defense attorneys could have cross-examined Ada MacNeill, now 12, but elected not to.

The jury heard from a number of witnesses on Tuesday, including friends of Michele MacNeill's who described her husband's unusual behavior after his wife's death in April 2007. Michele's sister, Linda Cluff, testified she saw Dr. MacNeill hobble with a cane, then walk normally when he believed no one was watching him.

"He was smiling, joking around and I heard him, it was particularly disturbing to me, he was joking, saying he would have to get used to living the life of a bachelor," Cluff testified of MacNeill at his wife's funeral.

"I told him I was so sorry," she cried. "I said, 'I don't have a job right now. My son's grown, I would be happy to help with the girls. Be a nanny.' He told me he had hired somebody."

That somebody, prosecutors allege, was Gypsy Willis, who resumed her testimony on Tuesday. Just before she took the witness stand, prosecutors asked Judge Pullan to allow them to treat her as a "hostile witness."

"She's out to protect Martin MacNeill as much as she can," prosecutor Sam Pead said.

The judge agreed and allowed prosecutors to ask her leading questions. Willis testified more about the affair she had with Dr. MacNeill, pointing out suggestive pictures she sent to him the day after his wife died.

Days after she was buried, Willis moved into the home as a "nanny."

"I actually did help out with the children," Willis told prosecutors, adding that they tried to keep their sexual relationship from the MacNeill children.

Months later, she testified, they started talking marriage. Her recollection was vague about the proposal, but she conceded that he proposed with a 4 1/2 karat diamond ring worth $7,000 -- at a restaurant in Wyoming.

Despite never marrying, Willis acknowledged she began going by "Jillian MacNeill." Dr. MacNeill, she said, filled out an application for a military ID form for her -- the date of the marriage was the date of Michele's funeral.

Testimony is expected to continue Wednesday with MacNeill's daughters Vanessa, Alexis and Sabrina testifying against him.

Late Wednesday, prosecutors announced that they had discovered a potential problem with their case against Dr. MacNeill involving toxicology reports, and the level of one drug found in Michele MacNeill's system.

Deputy Utah County Attorney Chad Grunander said levels of the anti-nausea drug promethazine were lower than reported. However, he did not believe it was enough to significantly change their case.

"It demonstrates that Michele was not administered an inappropriate amount of medication," Randy Spencer told FOX 13 outside of court.

Toxicologists still slated to testify were being contacted to determine if the new findings change their testimony. Prosecutors hoped to know by Thursday if they would still be able to take the witness stand.

"We're going to soldier on," Grunander said. "It's one part of a very big case."