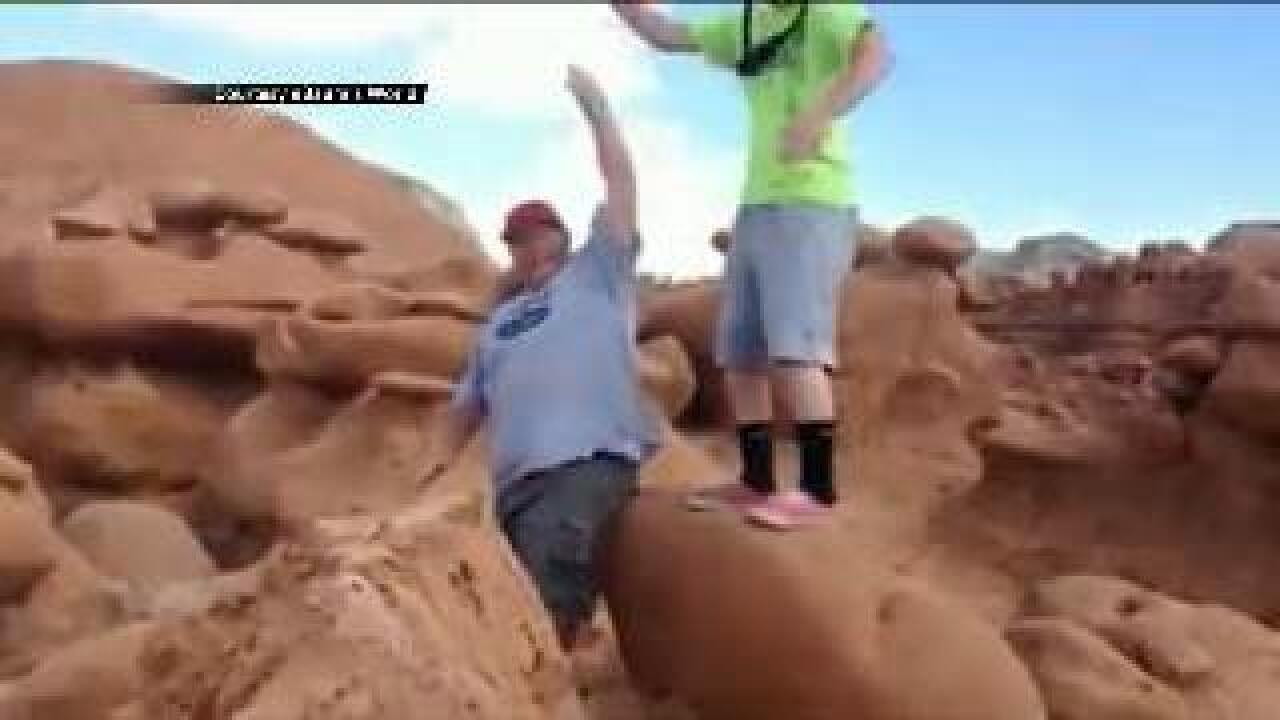 One of them filmed the incident, and it surfaced on the internet. Click here to see the video.

Critics call the act vandalism, but the culprits claim there's more to the story.

In the video you can hear David Hall from Highland reciting a phrase from a popular pop song: "wiggle it just a little bit.”

Then his buddy Glenn Taylor topples the boulder, known as a “Goblin”, as his son watches.

The three erupt in laughter, giving each other high fives.

"We have modified Goblin Valley," Dave Hall said in the video.

State park officials don't find it funny.  Those "goblins" date back to the Jurassic period. Jeff Rasmussen, deputy director of Utah State Parks and Recreation, said they are worried about the incident.

"It's a valley full of these rocks that are perched up on these earth platforms, and obviously we're very concerned and upset that someone would come and destroy this natural wonder that took millions of years to be formed,” he said.

The three Boy Scout leaders were on a church camp-out last weekend.  They said the video doesn't tell the whole story.

"You look at the video and you say 'Oh, those guys are hemming and hawing and having fun,’ that's one minute," Glenn Taylor said.

They insist, before the camera rolled, the goblin was loose and could've fallen on a family that just walked by.

In the video, Hall exclaims: "That's crazy that it was held up by that little bit of dirt.  Some little kid was about to walk down here and die, and Glenn saved his life by getting the boulder out of the way."

“We decided the best and smartest thing is, push it over so it can't fall on top of somebody," Hall told FOX 13 News.

Parks officials said, regardless of whether the rock was loose, the men had no business toppling the boulder.  Glenn Taylor said he regrets his actions.

"I wish we would have been smart enough to go get a ranger cause it was wrong of us to be vigilantes, and I'm sorry I did that,” he said.

It may be too late. The Emery County Attorney could file felony charges, and the matter still needs to go before the Boy Scouts.

"If you're a felon, you can't be a scouter and that would break my heart, but I did the crime," Taylor said.

District Director John Gailey with the Boy Scouts of America issued a press release Friday in response to the video, which stated:

"We are shocked and disappointed by this reprehensible behavior. For more than a century, the Boy Scouts of America has been a leader in conservation—from stewardship to sustainability. We teach our 2.6 million youth members and 1.1 million adult members, who collectively spend more than 5.5 million nights outdoors, the principles of ‘Leave No Trace.’ These principles stress a commitment to maintaining the integrity and character of the outdoors and all living things.

The isolated actions of these individuals are absolutely counter to our beliefs and what we teach. We are reviewing this matter and will take appropriate action."

State park officials learned of the video Wednesday and are still investigating.  It's unclear exactly what kind of charges they'll recommend or when they'll turn over their case to the Emery County Attorney.

Meanwhile, court records show the man pushing the rock, Glenn Taylor, recently filed a personal injury lawsuit over a car crash in Provo.  The accident happened in 2009, but the suit was filed just last month.  According to the court documents, Taylor claims he's still incurring medical fees.  FOX 13 News called him again for comment on that matter. We’re still waiting to hear back.