Biker attack video: Who is the real victim? 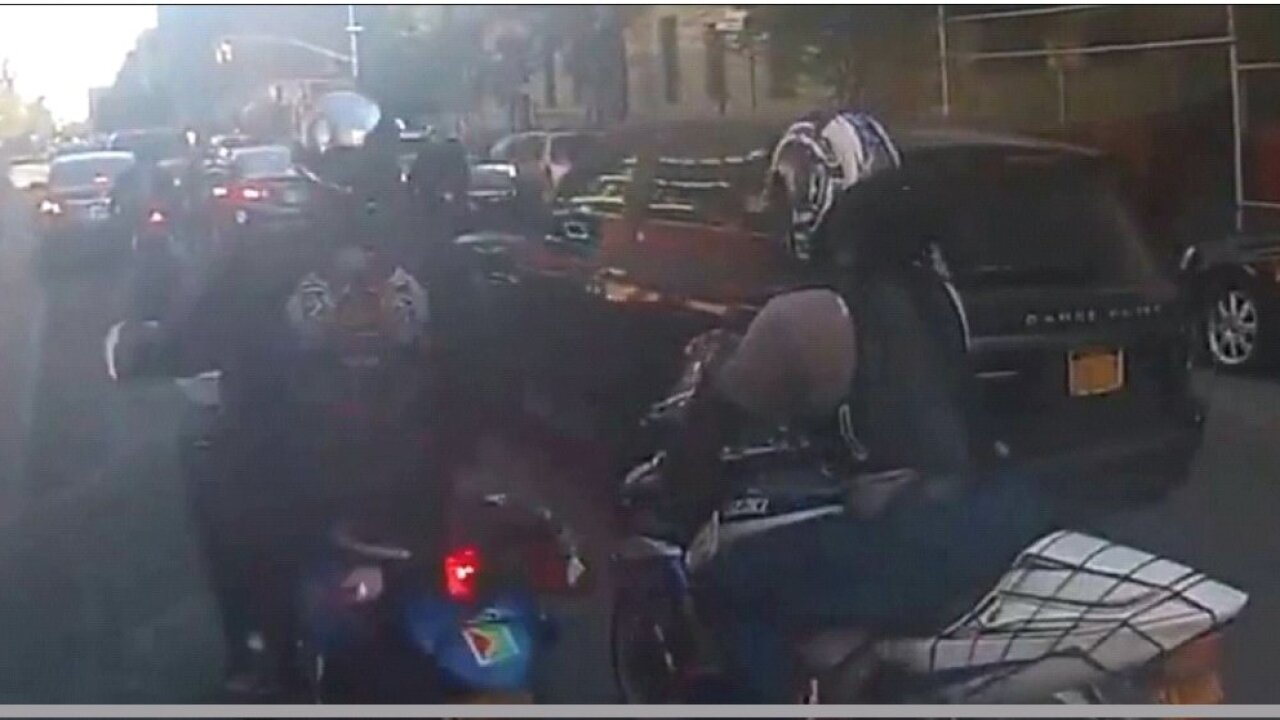 Deputy police Commissioner John McCarthy tells CNN the man in the right hand side of this wanted poster is the one who turned himself in to the 113th precinct. NYPD says he’s the one who allegedly used his helmet to bash the suv’s window in a viral video. The wanted poster was put out by police Monday night, September 30, 2013.

By Lateef Mungin and Pamela Brown

NEW YORK (CNN) — The video seems clear: an SUV driver hits a biker on Manhattan’s West Side, and sets off a violent chain of events. But now, a debate is raging over who should shoulder the blame for this disturbing attack.

Soon after the helmet cam video of the confrontation went viral, sympathies lay with the driver of the Range Rover.

Online commenters seemed to side with him. He was swarmed by a motorbike gang. He had his wife and 2-year-old daughter inside. He did what he had to do to protect them, they said.

But now supporters of the bikers being vilified for the weekend attack are pleading their case.

They gathered Wednesday night outside the Manhattan hospital where one of the bikers, Edwin Mieses, lies comatose. He was run over by the SUV as the driver tried to escape.

“It is an unfortunate situation on both sides,” said Lexie Filpo, who said she was one of the bikers. “I knew that car seemed reckless from the beginning. From when he first jumped on the highway. When things happened people were telling him to stop, to slow down, and he never did.”

“The officers, they want to arrest the bikers; they should arrest the driver as well,” Filpo said.

The incident took place on Manhattan’s West Side Highway on Sunday. Police said a man driving a Range Rover struck a motorcyclist who had slowed down.

The driver, Alexian Lien, pulled over and was surrounded by other bikers, part of a group called Hollywood Stuntz. They hit the vehicle and spiked its tires, police said.

The driver pulled away, plowing three more bikers, including the now-comatose Mieses.

The bikers chased him. Once he was stuck in traffic, they cornered the SUV. The video shows one biker using his helmet to smash the driver’s side window.

Police said the bikers dragged Lien out of the SUV and beat him. His wife and daughter were unharmed.

Lien was later treated at a local hospital for slashes to his face, and released.

Lien’s family released a statement Thursday through their attorneys saying he was “forced under the circumstances to take the actions that he did in order to protect the lives of our entire family.”

He and his wife were out to celebrate their wedding anniversary with their daughter when the incident happened, according to the statement.

“We know in our hearts that we could not have done anything differently, and we believe that anyone faced with this sort of grave danger would have taken the same course of action in order to protect their family,” the statement said.

Jerome Davis said he witnessed a part of the confrontation, and described the SUV driver as a “maniac.”

“If something happens, you stop right there. It’s an accident. You think and stop. You don’t keep reacting on,” he told CNN’s Erin Burnett on Wednesday.

But on CNN’s “New Day” Thursday, Davis said, “Two wrongs don’t make a right,” and said it was clear the SUV driver was afraid.

No charges against driver

Police have not said that they are seeking any charges against Lien.

But they arrested Christopher Cruz, who is seen slowing down in front of the Range Rover before he was bumped.

Cruz, 28, was in court Wednesday facing misdemeanor charges, including reckless driving. Cruz’s attorney told reporters that his client is not guilty.

Cruz was to be released after posting $1,500 cash bail and a $15,000 insurance bond. In addition, his license was suspended and he was ordered to surrender his passport.

“His motorcycle was struck and he stood right there,” Cruz’s attorney H. Benjamin Perez told reporters. “He never assaulted this man. He never tried to assault him in any way. And he does not know any of the other motorcyclists who were involved in this beating.”

A second biker, who police arrested, was released Wednesday when authorities determined that he may have been trying to help.

But that didn’t mean the prosecutors were done.

“Prematurely charging individuals with low-level crimes does not further the goals of the investigation, and could weaken the cases we expect to bring against the perpetrators of serious crimes,” said Karen Friedman-Agnifilo, the prosecutor who is overseeing the case.

“After we investigate the facts and each person’s individual actions, we will know what charges can be supported by the evidence. There is still a tremendous amount of investigation to be done.”

The New York Police Department released images and asked for the public’s help in identifying and locating suspects.

Police are also looking at a 2011 video that shows a separate case of biker violence. In it, riders appear to surround and antagonize a motorist.

Mieses’ family says the real victim of the confrontation is the hospitalized biker.

“All of his ribs are fractured. His lungs are so badly bruised that he’s still on a ventilator,” Yolanda Santiago, his mother, told CNN affiliate WCBS.

His wife, Dayana, told CNN affiliate WBZ that Mieses got off his bike to help the SUV driver.

“And whatever he did, he got scared, he peeled off, and he paralyzed my husband on the way,” she said.

Back at the vigil Wednesday night, the attendees raised almost $400. They hope to raise more at another vigil planned Thursday.

“I believe both of them should be charged because both of them were wrong—the biker and the guy in the car,” said Victor Rodriguez.