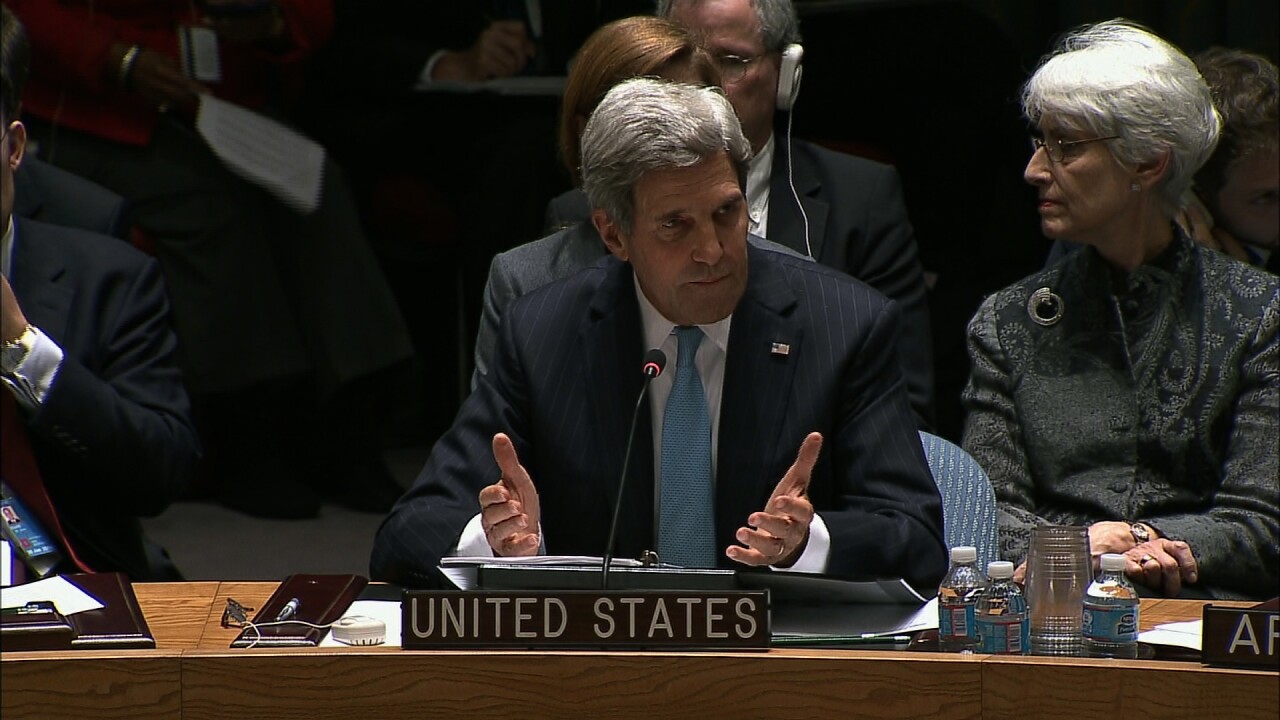 “Today’s resolution will ensure the the elimination of the Syria chemical weapons program happens as soon as possible and with the utmost transparency,” Secretary-General Ban Ki-moon said.

The resolution did not authorize the automatic use of force if Syria is said to be in violation, as was previously sought by the United States.

It requires “the destruction of a category of weapons that the Syrian government has used ruthlessly and repeatedly against its own people. And this resolution will make clear that there are going to be consequences for noncompliance,” Samantha Power, the U.S. ambassador to the United Nations, said before the vote.

Power described the move as significant, as it represented the first time since the start of Syria’s civil war that the Security Council would impose binding obligations on Syria.

The 15-member Security Council met shortly after another international group voted to fast-track Syria’s addition to the Chemical Weapons Convention, which bans such weapons.

Syria announced this month that it was willing to join the agreement.

The executive committee of the Organisation for the Prohibition of Chemical Weapons, or OPCW, meeting in the Netherlands, adopted its measure by consensus in about 10 minutes.

“We now have a legal mandate to start a verification mission in Syria,” said group spokesman Michael Luhan.

U.S. President Barack Obama, speaking before the votes, said he was “very hopeful” about the developments, but warned much work remains to be done.

“I think, rightly, people have been concerned about whether Syria will follow through on the commitments that have been laid forth and I think there are legitimate concerns as to how technically we are going to be getting those chemical weapons out while there’s still fighting going on the ground,” Obama said..

Obama said the threat of U.S. military power pushed Syrian leaders to agree to destroy their chemical weapons and said the resolution “not only deters and prevents additional chemical use but actually goes beyond what could have been accomplished through any military action.”

The president later said the resolution will ensure the Syrian government keeps its promises.

“We’ll have to be vigilant about following through, but this could be a significant victory for the international community, and demonstrate how strong diplomacy can allow us to secure our country and pursue a better world,” Obama said.

The OPCW plans to send an advance team of inspectors to Damascus on Monday, an official with the organization, who declined to be identified while discussing delicate operations, told CNN on Friday.

The team will establish a base for communications and begin preparations for inspections, the official said.

The official said that in order to meet international deadlines for destruction of Syria’s chemical weapons, the group may opt for a “quick and dirty” program that would render the weapons unusable but wouldn’t destroy them, the official said.

The United States and other Western nations blame the Syrian government for an August 21 chemical weapons attack outside Damascus that U.S. officials estimate killed 1,400 people.

Russia and Syria say they believe rebels used the weapons.

A role of late for Russia

“This is a breakthrough arrived at through hard-fought diplomacy,” a senior State Department official said about the resolution.

“The Russians have agreed to support a strong, binding and enforceable resolution that unites the pressure and focus of the international community on the Syrian regime to ensure the elimination of Syria’s chemical weapons,” the official said.

According to a draft obtained by CNN, the resolution requests the director general of the OPCW and the U.N. secretary general report noncompliance to the Security Council. In the event of noncompliance, the council would impose measures under Chapter VII of the United Nations Charter.

Russia was the one to offer a proposal that Obama and others have embraced — to eliminate the Syrian government’s chemical weapons stockpile.

Defense Minister Sergei Shoigu has said his country is willing to transport and destroy Syrian chemical weapons, although only as part of an international coalition.

Russia and the United States agreed earlier this month on the framework for such a plan. This came soon after Russian President Vladimir Putin took to The New York Times to argue against military intervention in Syria.

Striking Syria would have many negative ramifications, Putin argued in the piece, including the killing of innocent people, spreading violence around the Middle East, clouding diplomatic efforts to address Iran’s nuclear crisis and resolve the Israeli-Palestinian conflict and “unleash(ing) a new wave of terrorism.”