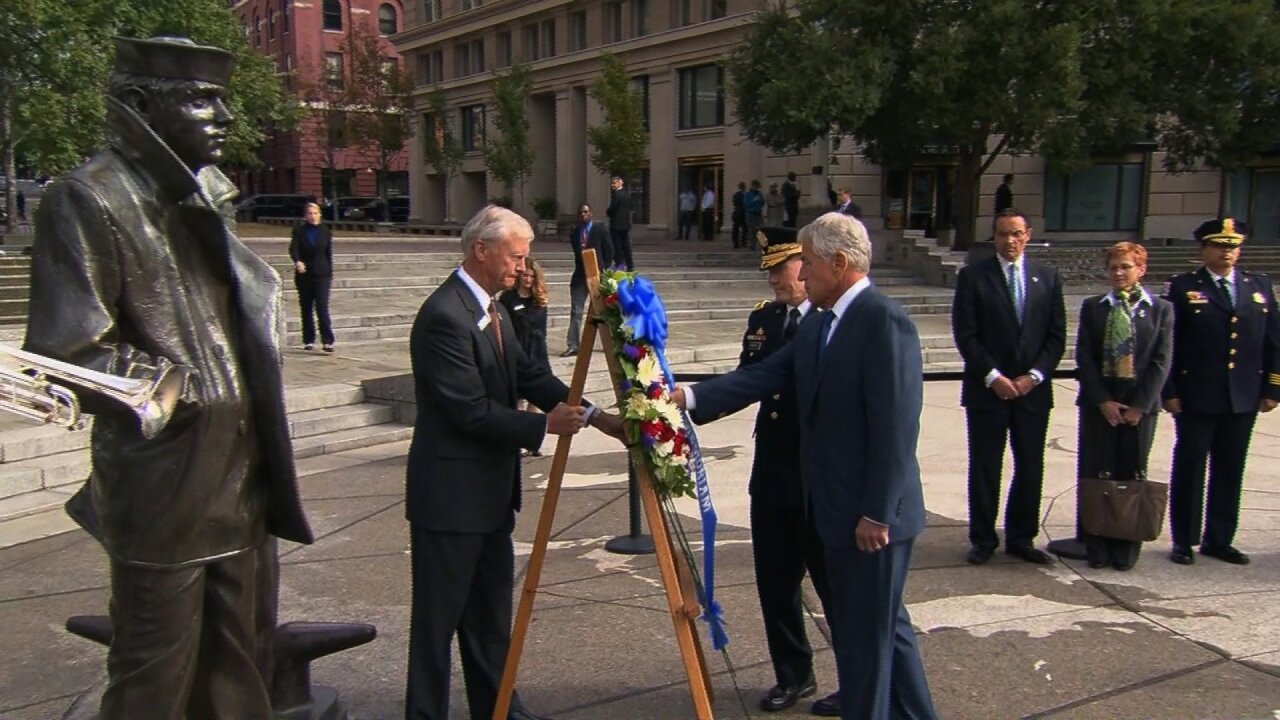 Senior Department of Defense officials, Defense Secretary Chuck Hagel and Joints Chiefs of Staff Gen. Martin Dempsey laid a wreath the morning of Tuesday, September 17, 2013 at the U.S. Navy Memorial in honor of the victims of the shooting at the Washington Navy Yard. September 16, 2013 alleged gunman Aaron Alexis opened fire on the complex killing 12, and wounding eight others.

By Holly Yan and Alan Duke

(CNN) — They were civilians and contractors, just starting their day at a massive military compound that’s normally a bastion of safety.

But for reasons that may never be known, a former Navy reservist cut their lives short when he went on a shooting rampage at Washington’s Navy Yard on Monday. Twelve families were left anguished.

About 3,000 people work at the Naval Sea Systems Command, and the Navy secretary said Monday it could take a full day before everyone is accounted for.

Jacqueline Alston hadn’t heard from her husband, Ernest, who is a custodial worker there.

“Right now, I’m asking God to let me hear that voice, to let me see that man again.”

• Michael Arnold, 59, of Lorton, Virginia, had a cold Monday, and his wife called to check on him when she heard an alarm in the background. He said he’d call her back, Arnold’s mother told CNN affiliate WDIV. He never had the chance.

Arnold — a Naval Academy grad, veteran of 29 years and avid pilot — was building his own plane that he hoped to fly to Michigan, where his mother, Patricia, lives, before he turned 60, the station said.

He had two master’s degrees from the University of Washington and worked designing ships at the Navy Yard, WDIV reported.

• Kathy Gaarde, 62, of Woodbridge, Virginia, took care of 94-year-old mother until she died last year, said Douglas Gaarde, her husband of 38 years. She also loved animals and counted bluebirds for a local refuge.

A Chicago native, Gaarde graduated from Florida State University before moving to Washington 38 years ago, where she has been a longtime Washington Capitals season ticket holder.

• Arthur Daniels, 51, of Southeast Washington, D.C., was married to Priscilla Daniels for 30 years. They had five children and nine grandchildren, according to WTTG-TV.

He worked at the Navy Yard as a handyman for 17 years and was on the fourth floor of Building 197 when the shooting began, his wife said.

• Martin Bodrog, 54, of Annandale, Virginia, grew up in New Jersey, Indiana and Massachusetts and graduated from the Naval Academy in 1981 before serving 22 years in the military, according to a family statement. After his career, he oversaw the design and procurement of ships for the Navy.

Bodrog and his family (wife of 23 years, Melanie, and daughters Isabel, 23, Sophie, 17, and Rita, 16) taught Sunday school for preschoolers, and he was active in Young Life, a Christian outreach group for high school students.

It was common to see him, in all weather, wearing shorts and a Boston Bruins jersey, walking his dog and helping shovel snow out of his elderly neighbors’ driveways.

Three were shot, including a woman who was struck in the head but miraculously survived. The bullet did not penetrate her skull.

The others were hospitalized for contusions and chest pain.

Among the injured is Washington Metropolitan Police Officer Scott Williams, who underwent surgery Monday afternoon for gunshot wounds to the lower legs.

Doctors will try to determine Tuesday whether he’ll be able to use his legs again.

“He was most concerned about being able to talk to his mother and wanted to make sure he was able to speak to her before he went into surgery,” said Dr. Janis Orlowski, chief medical officer at the MedStar Washington Hospital Center.

Wounded survivors are eligible for treatment at a U.S. military’ hospital, just as if they were soldiers wounded in war.

Amid the tragedy, tales of survival and heroism emerged.

A maintenance worker who tried to warn others was among those shot, said U.S. Navy Cmdr. Tim Jirus.

Jirus was standing in an alley at the bottom of a fire escape supervising the evacuation of Building 197 when the shooter approached him.

“(The maintenance worker) walked up and told me that he heard that there was a shooter in our building,” Jirus said. “And we were just standing there maybe three feet away having a conversation, and then we heard two more gunshots, and he went down and that’s when I ran.”

Jirus said he did not know the man. He was “fairly certain he is dead, because he was shot in the head.”

“I don’t feel lucky that he got hit instead of me, but I feel lucky to be here,” Jirus said.

CNN’s Chris Lawrence and Jonathan Auerbach contributed to this report.