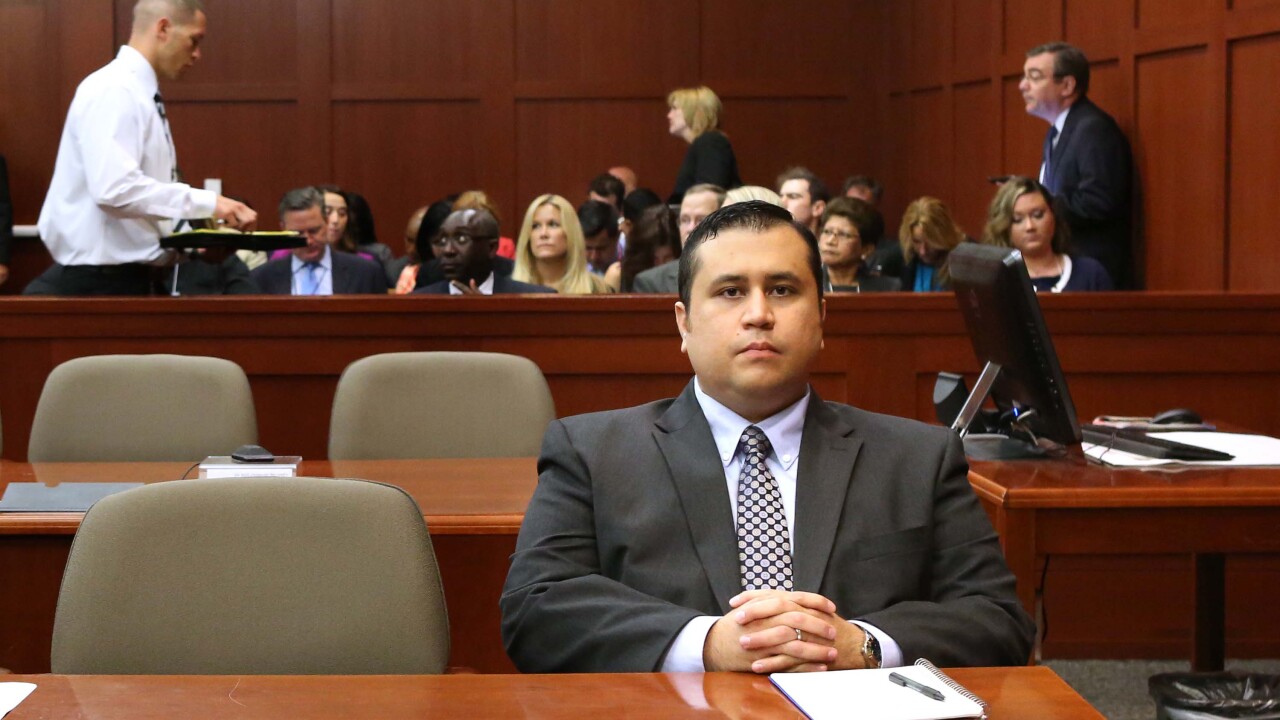 (CNN) — George Zimmerman is not guilty of the murder of Trayvon Martin, a Florida jury decided late Saturday.

The fact that Zimmerman fired the bullet that killed Martin was never in question, but the verdict means the six-person jury had reasonable doubt that the shooting amounted to a criminal act.

The verdict will surely inflame passions, as the case held the attention of a nation for its overtones of race and gun rights.

The six-person jury — all women — basically had three choices: to find Zimmerman guilty of second-degree murder; to find him guilty of the lesser charge of manslaughter; or to find him not guilty.

The jurors deliberated for 16½ hours total, including 13 on Saturday alone.

Earlier in the day, they asked the court for clarification on its instructions regarding manslaughter. The jury couldn’t have even posed such a query a few days ago: Judge Nelson ruled Thursday, over the defense’s vehement objection, to include manslaughter as an option for jurors, in addition to a second-degree murder charge.

The question — the jurors’ first since late Friday afternoon, when they requested an inventory of evidence — was read out in court shortly before 6 p.m. Saturday. After a brief discussion between lawyers and the judge, the court recessed for about 40 minutes.

When it reconvened, shortly before the judge announced the jury had ordered dinner, prosecutors and defense lawyers agreed to a response to the jury’s question — basically asking for more detail. “The court cannot engage in general discussions but may be able to address a specific question regarding clarification of the instructions regarding manslaughter,” their response to the jury says. “If you have a specific question, please submit it.”

Manslaughter, under Florida law, is “the killing of a human being by the act … of another, without lawful justification … and in cases in which such killing shall not be excusable homicide or murder.” It is a second-degree felony.

According to the jury instructions, Zimmerman could be convicted of manslaughter if jurors believe he “intentionally committed an act or acts that caused the death of Trayvon Martin.”

“George Zimmerman cannot be guilty of manslaughter by committing a merely negligent act or if the killing was either justifiable or excusable homicide,” the instructions add. “Each of us has a duty to act reasonably toward others. If there is a violation of that duty, without any conscious intention to harm, that violation is negligence.”

If convicted of manslaughter, Zimmerman could face up to 30 years in prison. The jury, however, hasn’t been told of possible sentence lengths for any charge.

To convict Zimmerman of second-degree murder, the jury would have to believe that “there was an unlawful killing of Trayvon Martin by an act imminently dangerous to another and demonstrating a depraved mind without regard for human life.”

Such a killing would have to be “done from ill will, hatred, spite or an evil intent” and would be “of such a nature that the act itself indicates an indifference to human life.”

The story starts the night of February 26, 2012, as Martin walked back to his father’s fiancee’s house through the rain from a Sanford convenience store, where he’d bought Skittles and a drink.

Zimmerman, a neighborhood watch volunteer, spotted him and called police. A 911 dispatcher told Zimmerman that officers were on the way and not to follow the allegedly suspicious person.

Nonetheless, Zimmerman got out of his car, later telling police he just wanted to get a definitive address to relay to authorities.

Sometime after that, Zimmerman and Martin got into a physical altercation. Some neighbors took notice: On one 911 call, anguished cries for help can be heard.

Who was yelling? Martin’s mother testified she’s “absolutely” sure it was her son; Zimmerman’s parents said, with as much conviction, that it was their own child.

There are also disputes about who was the aggressor, about whether or not Martin may have seen or reached for Zimmerman’s gun, about whether Zimmerman should have had more injuries if he was pummeled, as he claims.

And some accused Zimmerman — who identifies himself as Hispanic — of racially profiling the black teenager, a claim the defense camp flatly denies.

About the only thing not in dispute is that the now 29-year-old Zimmerman shot and killed Martin.

Nelson acknowledged this week that jurors have a lot of evidence, and competing arguments, to consider. She told them that, even as they pay close attention to the law and the facts, they should also “use your common sense.”

“All of us are depending on you to make a wise and legal decision,” she said.

Prosecution: ‘He shot him because he wanted to’

In his closing argument, Assistant State Attorney Bernie de la Rionda noted that — for all the evidence presented — the case boils down to two men. One of them, Martin, is dead and can’t give his side of the story. The other, according to the prosecutor, cannot be trusted.

De la Rionda asked: Why would a scared man get out of his car and walk around after being told not to? Shouldn’t Zimmerman have had more than a bloody nose and scratches on his head given the beating he allegedly took? And did he have an agenda — to do whatever necessary to stop one of those “f***ing punks,” as he’s heard saying under his breath in his call to police, from getting away?

Assistant State Attorney John Guy made the prosecution’s final pitch, during the rebuttal phase of closing arguments Friday. He echoed many points de la Rionda had made earlier, portraying Zimmerman as a frustrated wannabe police officer who took the law into his own hands. He had decided Martin was one of the criminals who had been victimizing his neighborhood, he said, then trailed him against the advice of police dispatchers.

“The defendant didn’t shoot Trayvon Martin because he had to,” Guy said. “He shot him because he wanted to. That’s the bottom line.”

Zimmerman, the prosecution said, had a powerful determination not to allow someone he had already decided was a criminal to escape.

“What is that when a grown man, frustrated, angry, with hate in his heart, gets out of his car with a loaded gun and follows a child? A stranger? In the dark? And shoots him through his heart? What is that?” Guy asked.

In the opinion of defense attorney Mark O’Mara, what George Zimmerman did was simple: he defended himself.

Zimmerman was looking out for those in his neighborhood when he saw someone he felt was suspicious and called police, O’Mara said in his closing argument. The defendant got out of his car, but briefly, and was walking back to it when things got physical.

Martin jumped out of some bushes and pounced, the defense contends. And, O’Mara added, the teen didn’t just hold Zimmerman down, but punched and slammed his head repeatedly into the sidewalk.

“That was somebody who used the availability of dangerous items, from his fist to the concrete, to cause great bodily injury against George Zimmerman,” said O’Mara.

The lead defense attorney also criticized the prosecution’s case, saying it was full of “coulda beens. How many ‘what ifs’ have you heard from the state in this case?” There’s no merit, he claimed, to the depiction of Zimmerman as a frustrated, spiteful man seeking vengeance.

“Do not give anybody the benefit of the doubt except for George Zimmerman,” O’Mara said.

Tensions high ahead of verdict

There was a buzz outside the Sanford courtroom Saturday, punctuated by occasional speeches, songs and impassioned words — at times directed against those on the other side of the debate.

There were those calling for a guilty verdict who held up a large banner reading “End racial oppression” and who yelled in unison, “We want justice.” On the other side, Zimmerman backers toted signs saying “Self-defense is a basic human right,” “Not enough evidence,” and plainly “Not guilty.”

Many of these themes have been echoing since the weeks after Martin’s death, when tens of thousands attended rallies led by civil rights activists demanding Zimmerman’s arrest and chastising authorities for their handling of the case.

Zimmerman surmised Martin was a criminal like those who’d struck in his neighborhood before — at least one of whom was black — a lawyer for the late teen’s family said Friday. But Martin was not a criminal, which Daryl Parks said contributes to the racial tensions that still surround this case.

While he wouldn’t call Zimmerman a racist, “this case in its totality has a racial undertone to it,” Parks told CNN’s Anderson Cooper.

The defense has strongly rejected accusations Zimmerman is racist, with O’Mara citing his client’s work as a mentor to black children and his taking a black girl to his prom as evidence of his non-racist beliefs.

His defenders have been passionate as well, especially about a person’s right to defend himself with a gun when attacked. Debate swirled over Florida’s “stand your ground” law, which allows those who believe they are in imminent danger to use deadly force to protect themselves.

In light of this ongoing fervor, authorities asked for calm while setting up contingency plans to respond to incidents tied to a verdict. The Rev. Jesse Jackson Jr. was among those appealing for peace Friday, while Zimmerman’s family urged people to “respect the rule of law, which begins with respecting the verdict.”

“Freedom of expression is a constitutional right,” said the sheriff’s office in Broward County, in the Miami area. “While raising your voice is encouraged, using your hands is not.”

But O’Mara said that, whatever the outcome, his client will not feel safe.

“There are a percentage of the population who are angry, they’re upset, and they may well take it out on him,” he said.