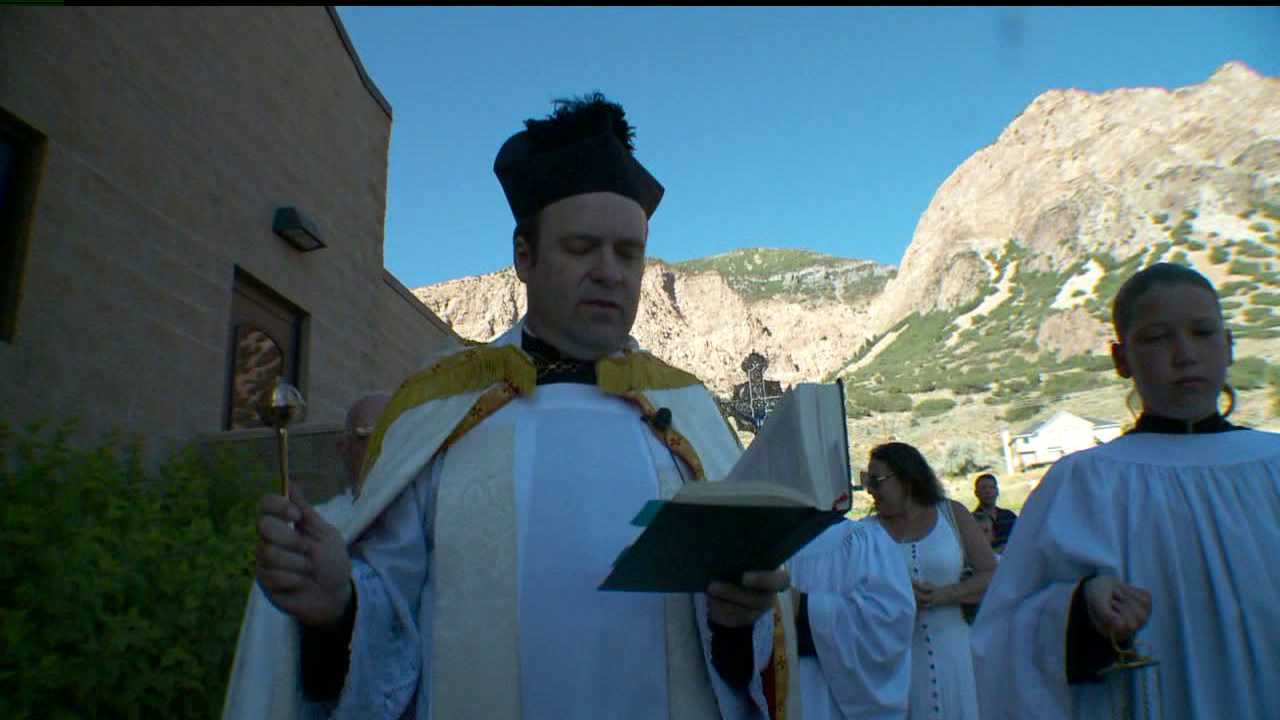 OGDEN -- Father Erik Richtsteig led his flock around the chapel as he sprinkled holy water to cleanse the desecrated ground.

"Wash me and I shall be whiter than snow," he read aloud from the liturgy of reparation. "Let me hear joy and gladness, humbled may I rejoice..."

Hundreds followed behind him. Down the sidewalk, over the grass, into a field and down a rocky hillside and back up to the entrance of St. James Catholic Church. Inside, he beseeched the saints to heal the congregation.

"Pray for us," the congregation replied.

"Pray for us," they said in unison as he went down the list of saints.

Worshipers at St. James gathered to drive out the evil that desecrated their holy space on Father's Day, when witnesses said Charles Jennings, Jr., walked into mass and pulled out a gun, shooting his father-in-law, James Evans, in the head.

As some worshipers rushed to Evans' aid, others in the congregation charged at Jennings -- who fled. He was arrested hours later on I-84 near Tremonton, police said, after the vehicle he had stolen ran out of gas.

Authorities have not said much about a motive, but did say there was a history of domestic disputes involving him.

Evans had barely turned his head when the shot was fired. Instead of going through his head, it went through is jaw. His wife Tara told FOX 13 that it was a miracle that he survived it.

"I do believe in miracles because the first miracle was the turning of the head. That was by God, that wasn't by accident," she said. "If he hadn't turned his head, he would have been dead."

Tara Evans said that her husband was recovering remarkably, and may be released from the hospital this weekend. His jaw is wired shut, but he was able to speak with her for the first time since he was shot on Sunday.

"He's got a trach, but they put a little button on it today so he can talk," she said. "The first thing he said? 'I love you, Tara,' which is really good!"

Evans was surrounded by friends and family, eager to hug her and give words of encouragement. Many had been seated around her when her husband was shot and rushed to help.

"With prayers and the faith that we have, we'll survive," said Leon Bedford. "We'll get through it."

The liturgy of reparation that was performed here is so rare, that the priest had to look it up and ask others in the diocese how to perform it. Father Richtsteig said he was glad to see so many attend the service.

"It felt good, and it was especially good to see so many of the people who had been here at the 11:30 mass, here with us all today," he said, referring to the shooting. "I had been kind of afraid that some of the people would have been afraid to come back. But I am very proud of my people."

But he worries about the long-term effects of the shooting. In his remarks, he spoke of mental health counseling that is available for all who were there -- especially the children. He also spoke against domestic violence.

He urged the audience not to seek vengeance.

"Unless we forgive, we won't be forgiven," he said. "And He's forgiven us each one of our sins. And because He has forgiven us, we have to."

Jennings made a brief appearance in Ogden's 2nd District Court on Thursday. A judge scheduled a July 22 hearing to determine whether to hold a preliminary hearing, where he would determine if there is enough evidence to make Jennings stand trial for attempted murder.