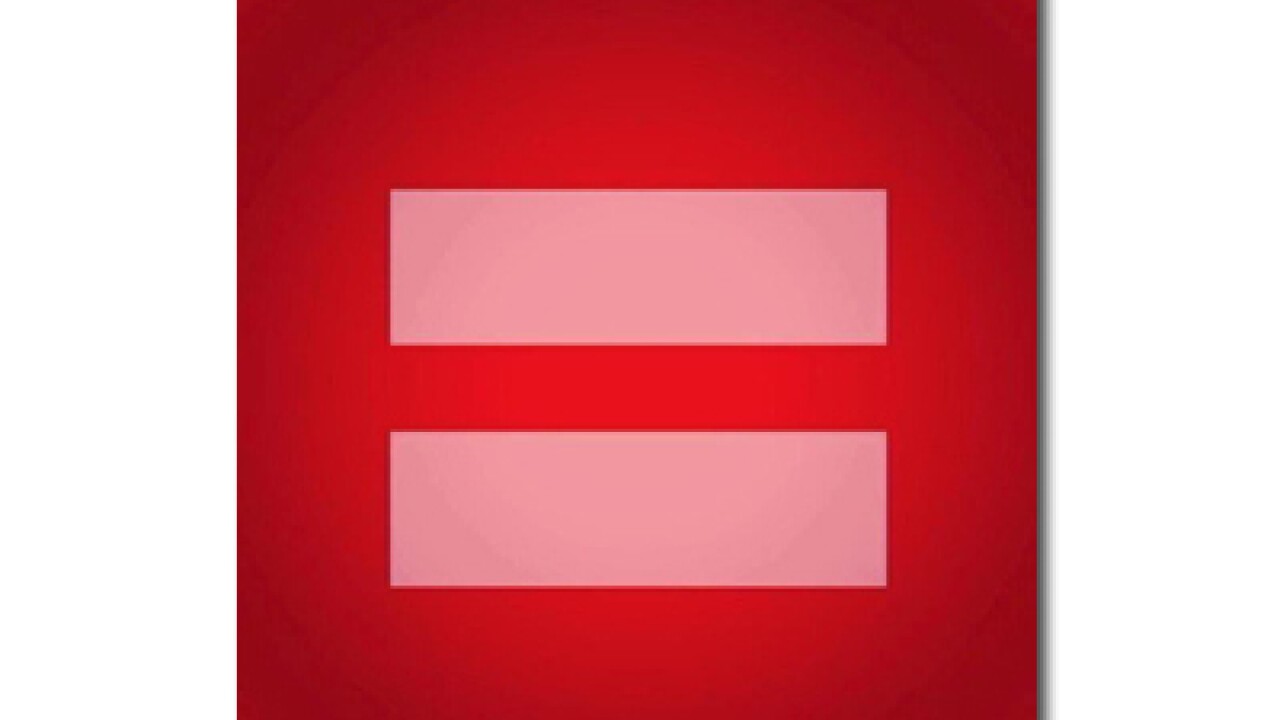 (CNN) — Scroll through your Facebook newsfeed today and there is a good chance you will be seeing red.

A simple red equal sign, a variation of the Human Rights Campaign’s traditionally blue and yellow logo, has dominated social media. In total, according to Fred Saiz, vice president of communication for the gay-rights organization, the image has been seen by 10 million people on Facebook alone.

The image was first posted at 1 p.m. ET on Monday and since then Saiz said it has “snowballed” into a bigger deal than the HRC expected. While one post by the campaign that used the image was shared 43,000 times, a number of people have saved the image as their own at the HRC’s urging and have replaced their profile picture with the red equal sign.

“It has caught us off guard, to be honest with you,” Saiz said. “It has taken off like wild fire.”

For an hour Tuesday morning, the Human Rights Campaign website crashed, according to Saiz, because of the traffic they were getting off the image.

One of the top trending terms on Facebook on Tuesday was “equality,” according to data from the social networking website. On the day that the Supreme Court heard arguments over Proposition 8, a law that prohibited same-sex marriage in California, use of the term spiked more than 5,000 percent.

This is high, considering the fact that “equality” is a term used every day.

Takei, the famed Star Trek actor and prominent gay rights activist, has a massive Facebook following and changed his Facebook profile image to the red logo.

A post from him this morning asking people to adopt the logo has over 64,000 likes and more than 31,000 shares.

Another post overlaying the internet meme “Grumpy Cat” on top of the red logo has quickly gone viral with more than 60,000 likes and 17,000 shares within the first half an hour of posting.

Saiz, from the Human Rights Campaign, called the reaction “unprecedented.”

“You always hope that these things will capture the imagination of those that see it,” he said. “I think what you can’t predict and plan for how individuals with a bigger reach than your own are going to make your reach exponential in nature.”

Although an image in favor of same-sex marriage dominated outside the courthouse, justices inside seemed reluctant to extend a sweeping constitutional right for gays and lesbian to wed in all 50 states.

In the first of two days of hearings on cases that have the potential to fundamentally alter how American law treats marriage, Justice Anthony Kennedy — considered the likely deciding vote on the divided court — questioned whether justices should even be hearing the issue.

The overriding legal question in the California case is whether the 14th Amendment guarantee of equal protection under the law prevents states from defining marriage as that state has.

The Family Research Council, an organization “honoring God’s design for marriage and celebrating all who have joined together as man and wife,” also created their own shareable social graphic featuring a man and a woman holding hands.

Over the past few days, the image has received over 10,000 likes and shares.

Additionally, the March for Marriage, a Tuesday afternoon event aimed at advocating marriage between a man and a woman, has been posting sharable graphics on its Facebook page in the last week. The page itself has received almost 4,000 likes.

However, these campaigns have been overshadowed on Facebook by the efforts same-sex organizations like the Human Rights Campaign have undertaken.