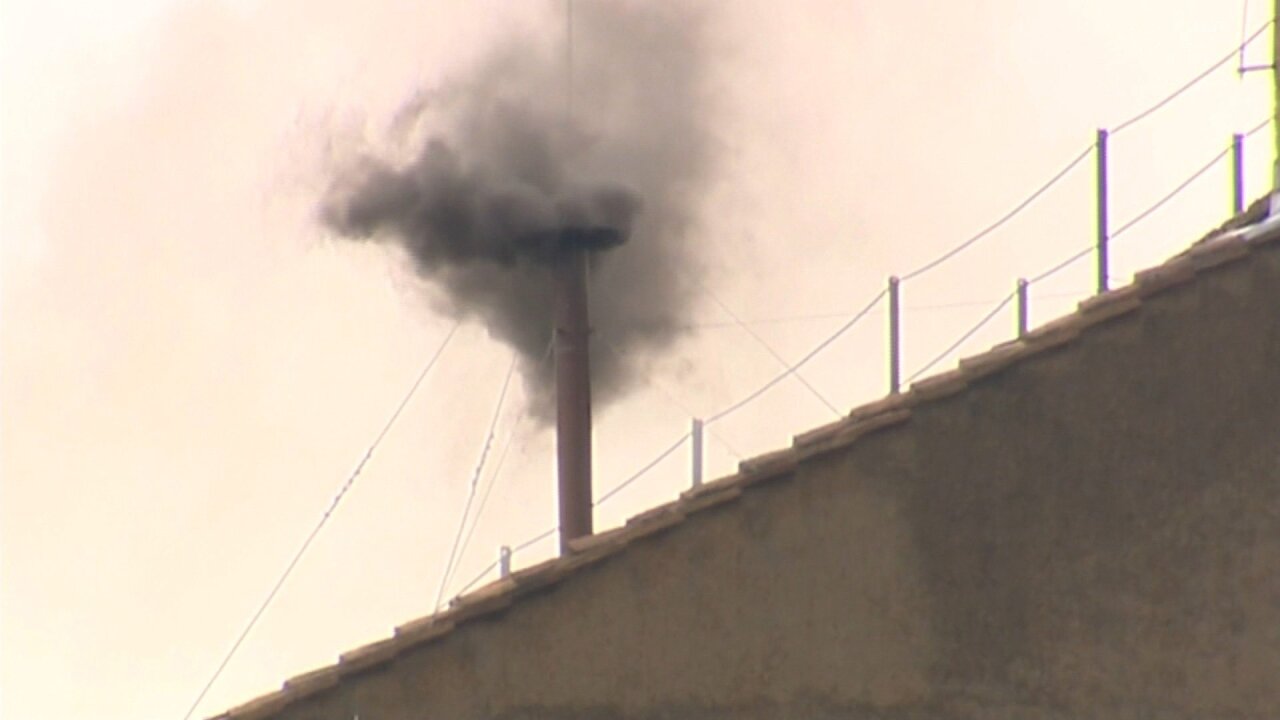 Black smoke pours out of the chimney during the third vote for a new Pope.

ROME (CNN) — Black smoke poured from the chimney fixed to the roof of the Sistine Chapel on Wednesday morning, indicating that the cardinals’ first two votes of the day were inconclusive.

The 115 voting cardinals are taking part in the second day of the secretive conclave to elect a new pope.

They will have two more opportunities to vote later Wednesday.

A two-thirds majority is required to confirm a new pontiff to step into the shoes left empty by the historic resignation of Benedict XVI at the end of last month.

Whoever it may be will take on the leadership of a church that has been rocked by child sex abuse scandals and corruption claims in recent years.

No smoke emerged after the first vote Wednesday morning, meaning the cardinals then entered a second round of voting.

The black smoke that poured from the chimney at 11:39 a.m. local time (6:39 a.m. ET) indicated that no result came from that second ballot, either.

The cardinals have now gone to lunch in the Vatican hotel where they are staying. While away from the Sistine Chapel, they are able to have informal conversations and mull their options.

The smoke came somewhat earlier in the day than expected Wednesday because once the cardinals are familiar with the voting procedures, they can move relatively quickly, according to the Rev. Thomas Rosica, a Vatican spokesman.

However, that does not mean they are moving rapidly toward a decisive vote.

The cardinals will go back into the Sistine Chapel, famed for its frescoes by Michelangelo, for a second round of balloting at 4 p.m. (11 a.m. ET), and all eyes will then return to the chimney.

Three ballots have been held so far.

Vatican spokesman the Rev. Federico Lombardi told reporters that the inconclusive results so far were not unexpected, based on the number of ballots held in past conclaves.

Rosica added, “This is normal and one should not interpret this as division amongst the cardinals.”

Two stoves are set up in the Sistine Chapel especially for the vote. The ballots are burned in one, while special cartridges containing a mix of chemicals are burned in the other to make the color of the smoke more obvious, either black or white, Rosica said.

The cartridges produce smoke for about seven minutes, he said.

If a pope has been elected, the cardinals burn the ballots immediately. If not, the cardinals hold on to them and proceed to a second round of voting.

They burn the ballots from both rounds together after the second round.

In the past, discerning the color has been difficult at times, as it has appeared gray. But there is a second, unmistakable sign: If the smoke is indeed white, the Vatican church bells ring to celebrate the choice.

This can happen after a short delay, as was the case when the white smoke went up to signal the election of Benedict XVI.

In any case, the wait for the announcement of a new church leader should not be too long. The longest papal conclave in the past century took just five days.

Black smoke also billowed from the chimney of the Sistine Chapel on Tuesday night, after the cardinals failed to choose a new pope in the first vote of their conclave.

Huddled under umbrellas as rain came down, crowds of onlookers watched the chimney and big screens set up in St. Peter’s Square.

Their interest reflects the “very intense and beautiful period” the church is experiencing at the moment, Lombardi said. “We are feeling the level of intensity of the wait. We saw many people in the square last night, a lot more than I myself had expected.”

Benedict had earlier watched on TV as the scarlet-clad cardinals attended a special Mass and took their oath of secrecy in the Sistine Chapel to begin the conclave to elect his successor, he said.

The Vatican received calls Tuesday night from people concerned that the heavy black smoke might have caused damage to the Sistine Chapel or created problems for the cardinals, Rosica said.

But, he said, he could confirm that the frescoes have not been damaged and that the cardinals are enjoying good health.

The cardinals will remain locked in isolation until one candidate, almost certainly from among their number, garners a two-thirds majority, or 77 votes, and is named the new spiritual head of the world’s 1.2 billion Roman Catholics.

Until that moment, the cardinals are barred from communicating with the outside world in any way. Jamming devices have been installed to prevent the use of cell phones or other devices.

The cardinals stay in the Casa Santa Marta, a Vatican City hotel, for the duration of the conclave, moving from there to the Pauline Chapel to pray or the Sistine Chapel to vote.

Applause echoed around St. Peter’s Basilica on Tuesday as Cardinal Angelo Sodano, dean of the College of Cardinals, offered thanks for the “brilliant pontificate” of Benedict, whose unexpected resignation precipitated the selection of a new pope.

When cardinals elected Benedict in 2005, after a conclave that ran into a second day, the white smoke signaling the decision came about six hours after an earlier, inconclusive vote.

Benedict is currently staying at the summer papal residence, Castel Gandolfo, while restoration work is carried out on a small monastery within Vatican City. Once it is ready, he will live out his days there in study and prayer.