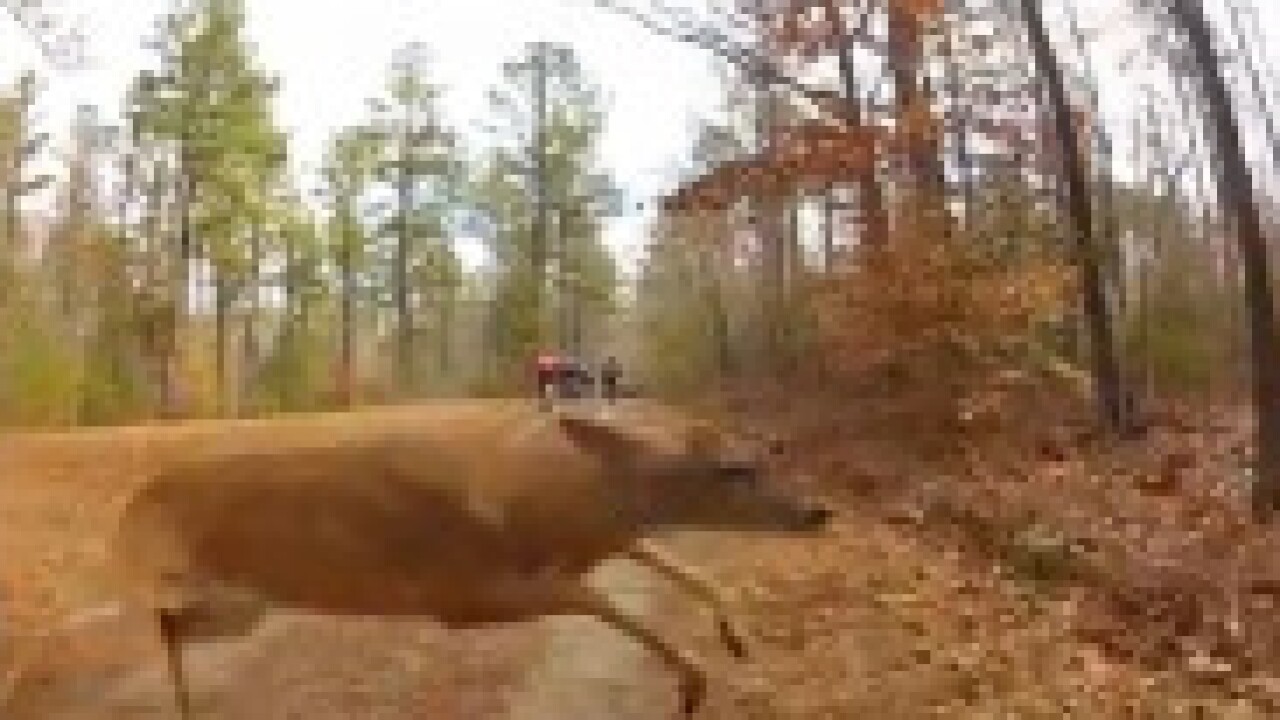 CHESTERFIELD COUNTY, Va. (WTVR) – A Virginia mountain biker knocked off his bike by a leaping deer got back on his bike and finished the race. Cyclist Jeff Plassman posted video of Sunday’s collision to YouTube on Monday. It’s now been viewed over 500,000 times.

Plassman said it happened near the start of Sunday’s Monster Cross and Mountain Bike race at Pocahontas State Park.

“I was just paying attention to where I was going and I heard somebody say something about a deer,” Plassman said in a phone interview. “All of a sudden all I saw was fur, the sky and then the ground.  It basically ran over me off of my front wheel. I got right up and I was okay. A lot of people were asking if I was okay, and I was. Just kind of a real surprise.”

Plassman said he was able to complete the three and a half hour race. The deer, he said, continued off into the woods.

Plassman, who records his races using a GoPro HD Hero 2, said he posted the clip of his accident to YouTube on Monday.

“I tried to pare it down the essentials, the parts people would find interesting,” Plassman said. “I’ve seen these kind of viral things before so I figured it did not need to much exposition and too much back story.”

Since the impact was so fast, Plassman said he slowed the video down to show viewers what really happened.

Four days and hundreds of thousands of YouTube views later, Plassman seemed overwhelmed with the exposure his video is receiving.

“Wow, I can’t believe how fast this is blowing up!” he wrote on Facebook. “I’ve spent hours and hours editing bike videos, but all it takes is getting knocked down like on America’s Funniest Home Videos. I’ll take it.”

Plassman said while the viral attention has been fun, he has no plans to take on other wildlife in the future.

“I’d really like to tell the story of what we do as mountain bikers in these various races,” he said. “I never have to make up a story. Crazy things happen. In this case it just happened to be something people really enjoyed watching.”