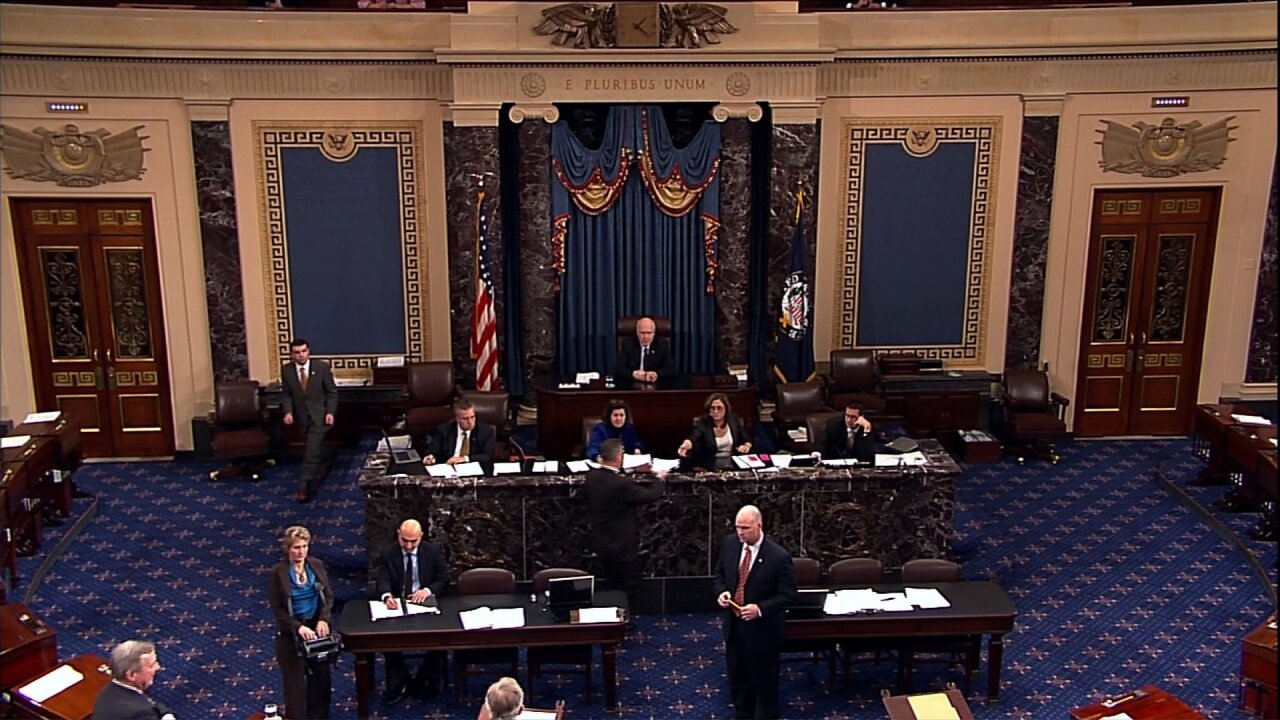 The Senate votes on the fiscal cliff deal in the early morning hours of January 1, 2013.

WASHINGTON (CNN) — The House is expected to vote Tuesday night on a last-ditch Senate compromise to avert the feared fiscal cliff.

The measure that sought to maintain tax cuts for most Americans but increase rates on the wealthy passed the Democratic-led Senate overwhelmingly early in the day. Republican frustration over deficit reduction muddled prospects for final action in the GOP-controlled House.

There was discussion as to amending the Senate bill by adding spending cuts, but in the end, House lawmakers will vote on the bill as written — a so-called up or down vote.

The Senate bill would raise roughly $600 billion in new revenues over 10 years, according to various estimates.

“This is the best we can do given the Senate and the White House sentiment at this point in time, and it is at least a partial victory for the American people,” she said. “I’ll take that at this point.”

Timing is crucial as a new Congress is set to be sworn in Thursday. Congress would have to start over with votes if there was no action on the Senate bill or any other proposal by then.

The legislation would avert much of the fiscal cliff’s negative near-term economic impact by extending the Bush-era tax cuts for the majority of Americans. It would also extend long-term unemployment benefits that were set to expire.

If the House doesn’t act and the tax cuts enacted last decade expire fully, broad tax increases will kick in as will $110 billion in automatic cuts to domestic and military spending.

The nonpartisan Congressional Budget Office has predicted the combined effect could dampen economic growth and possibly tip the United States into recession.

Global financial markets watched developments in Washington closely. Wall Street, which was closed on Tuesday due to the holiday, rallied on Monday on prospects that a deal finally would be approved by a bitterly divided Congress.

“This Congress unfortunately has been most known for a unwillingness to compromise, an unwillingness to come together to act on behalf of the American people,” said House Democratic Whip Steny Hoyer. “Today is Jan 1st. Taxes will be going up on everybody in America if we don’t act.”

But not all congressional Democrats were happy with the proposal. Liberals, especially, believed it was not tough enough on the rich.

Sen. Tom Harkin, D-Iowa, complained that the deal “makes tax benefits for high-income earners permanent, while tax benefits designed to help those of modest means and the middle class are only extended for five years.”

It would raise tax rates for those over those levels — marking the first time in two decades the rates jump for the wealthiest Americans.

The proposal would temporarily extend certain tax breaks, such as the one for college tuition, while making new tax rates permanent.

While the deal gives President Barack Obama bragging rights for raising taxes on the wealthiest Americans, it also leaves him breaking a promise.

Obama had vowed to raise tax rates for the top-earning 2% of Americans, including those with household income above $250,000, and individuals earning more than $200,000.

“What I’m not going to do is to extend Bush tax cuts for the wealthiest 2% that we can’t afford and, according to economists, will have the least positive impact on our economy,” the president said at a news conference in November, after being asked by CNN why Americans should believe he would not “cave again this time” by allowing those Bush-era tax cuts to be extended.

The deal passed by the Senate would cap itemized deductions for individuals making $250,000 and for married couples making $300,000.

Raising the threshold for higher tax rates to $400,000 shrinks the number of Americans affected. While nearly 2% of filers have adjusted gross incomes over $250,000, only 0.6% have incomes above $500,000, according to the Tax Policy Center.

Still, in a written statement early Tuesday, the president held on to the 98% figure he has so often touted.

The deal “protects 98% of Americans and 97% of small business owners from a middle class tax hike,” he said. “While neither Democrats nor Republicans got everything they wanted, this agreement is the right thing to do for our country and the House should pass it without delay.”

However, many Americans are still likely to see their paychecks shrink somewhat, due to a separate battle over payroll taxes.

What the Senate proposes

Under the Senate package:

— Unemployment insurance would be extended for a year for 2 million people.

— The alternative minimum tax — a perennial issue — would be permanently adjusted for inflation.

— Child care, tuition and research and development tax credits would be renewed.

— The “Doc Fix” — reimbursements for doctors who take Medicare patients — will continue, but it won’t be paid for out of the Obama administration’s signature health care law.

— A spike in milk prices will be avoided. Agriculture Secretary Tom Vilsack said milk prices would have doubled to $7 a gallon because a separate agriculture bill had expired.

While the package provides some short-term certainty, it leaves a range of big issues unaddressed.

It doesn’t mention the debt ceiling, and temporarily puts off for two months the automatic cuts in federal spending that would have taken effect Wednesday. It would have reduced the budgets of most agencies and programs by 8% to 10%.

This means that, come late February, Congress will have to tackle both those thorny issues.