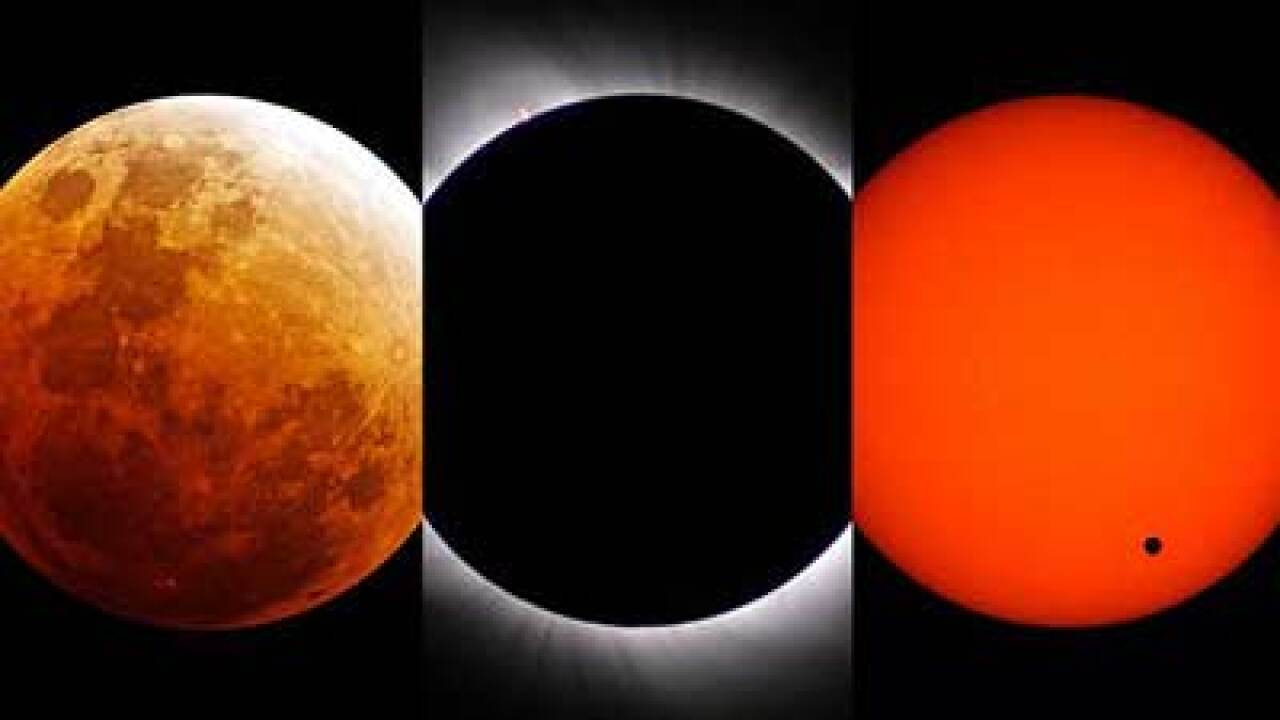 By Melissa Gray
(CNN) — Thousands of people are planning viewing parties in the western United States for Sunday’s annular solar eclipse, a rare event in which the sun will appear as a thin ring behind the moon.

The eclipse will be visible on a path from northwestern Texas through New Mexico, northeastern Arizona, southern Utah, Nevada, northern California and southwestern Oregon late in the day on May 20.

As the sun continues its path, the eclipse will then be visible over the North Pacific, in southern Japan and southern China on the morning of May 21.

“I recommend anyone who has the chance to see this, because while they do happen occasionally, it’s a fairly rare event,” said Jeffrey Newmark, a solar physics specialist with NASA. “It’s a neat thing to see.”

The last annular eclipse appeared in the United States in 1994.

More than 1,000 people may flood the small town of Kanarraville, Utah — population 300 — to get one of the best views of Sunday’s event, said Bonnie Char, spokeswoman for the Cedar City-Brian Head Tourism Bureau.

County and town authorities plan to provide everything from food to portable toilets to accommodate the crowds, and sheriff’s deputies and police officers will be directing traffic, Char said. The town is calling the eclipse “the ring of fire.”

The Brian Head Resort is opening its ski lift so people can watch the eclipse from atop the mountain peak of more than 11,000 feet. For $8, visitors will get a ride up the mountain and solar glasses with which to view the eclipse before the sun sets behind the nearby mountains, Char said.

The Fleischmann Planetarium at the University of Nevada, Reno and the Chabot Space and Science Center in Oakland, California, are among those holding viewing parties.

The CapRock Winery in Lubbock, Texas, is inviting people to sit outside on blankets — glass of wine in hand — to see the eclipse. Eclipse viewers can also sit among the ancient springs of the Lubbock Lake Landmark at an event hosted by the South Plains Astronomy Club.

“I’m very excited about the event,” he told CNN. “MRO sits on top of South Baldy Mountain, at about 10,000 feet. I’ve never before seen an annular eclipse so I’m not really sure what exactly to expect, though my guess is that it will be quite spectacular.”

The whole eclipse will last for a couple of hours as the moon passes in front of the sun, creating a partial eclipse. The actual annular portion, in which the sun appears as a thin ring, will be about four minutes long, Newmark said.

More than 80% of the sun will be blocked out during the apex, he said. Outside of the eclipse’s narrow path of less than 200 feet, people will be able to see only a partial eclipse.

“This will cause less change in the daylight than you might think,” said Alan MacRobert, a senior editor at Sky & Telescope magazine. “Moderately thin clouds would dim the sunlight more. And if you’re where the eclipse is only partial, the dimming will be less.”

Newmark said people should not peer up at the sky to view the solar event without special viewing equipment. Viewing the sun with the naked eye can cause blindness.

Eclipse glasses, welder’s goggles or an astronomer’s filter made for sun viewing are recommended if people want to look skyward.

Another way to view the eclipse is by using binoculars and telescopes to project an image of it on the ground, Newmark said. Point the binoculars or telescopes at the sun — without looking through the lenses — and aim the other end onto a piece of paper or cardboard.

In northern Utah, “ecliptomaniacs” are planning to travel south to view the event, said Patrick Wiggins, a NASA ambassador in Salt Lake City. He is planning to lead his own contingent to the Cedar City area.

He said astronomy club members “realize they could either drive four hours to see the eclipse or wait 11 years for the next one.”

Wiggins said he always looks forward to seeing people’s reactions to an eclipse.

“You get everything from stoic, staring into the sky … to people breaking down and crying, they’re just so moved,” he said.